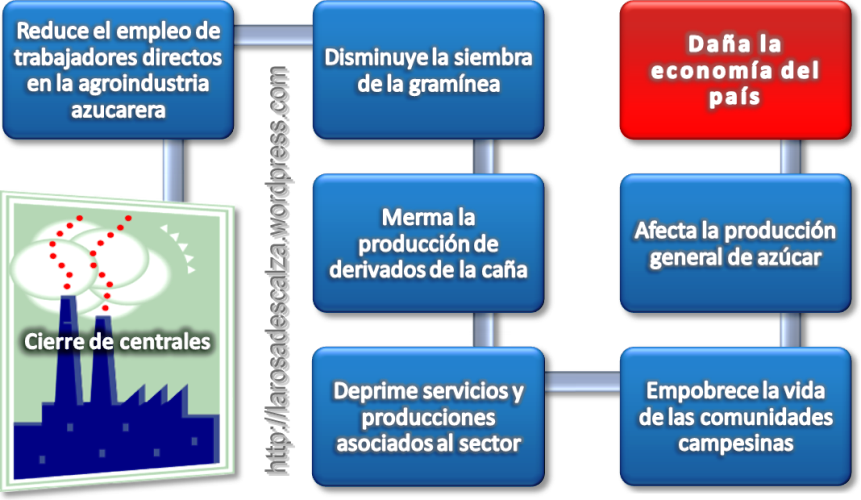 (diagram)  Closing of sugar mills >> reduces direct employment of workers in the sugar agro-industry >> diminishes planting of sugarcane >> reduces production of derivatives of sugarcane >> depresses services and production related to the sector >>  impoverishes the quality of life of communities of farm workers >> affects in general sugar production >> hurts the country’s economy.  (end diagram)

As if we were dealing with an erotic passage, each day, the arbitrary and improvised nature of the system or policy of prices in Cuba gets undressed.  Like the policy itself – being designed by the pyramid of power, we find it capricious and illogical sometimes – permeates all societal strata and impacts the actions and speech of diverse aspects of our reality, including household finances.  Like a well established culture of sultanístico volunteerism, many prices seem to be determined from the fly of the pants of some leaders, independent of the law of supply and demand; even more, after a process as long as the Cuban, January 1 of 2012 will mark fifty-three years of doing and undoing at the whim of the original “guides”.

I say this because after “digesting”and concatenating certain news offered in different occasions by the newspaper Granma, mouthpiece of the Communist Party, regarding the sugar cane agro-industry, sugar cane itself, the mills and the equipment required for its exploitation, I reflect on this important sector which for centuries was the fundamental industry of our country.

The problem is not simple, happening first because a bad decision to close two thirds of the sugar mills in Cuba with the consequent decapitation of the economic activity of the sugar mill communities and the whole infrastructure created around the mills, affecting other rural communities that exist around these agro-industrial centers; which led to a reduction in the number of jobs in planting and harvesting of the cane, depressed production of syrups, electric energy and other derivatives of sugarcane such as alcohol, animal feed, waste for furniture making, etc.

It may be central to the economy to diversify agricultural production, but fighting the monoculture should not be accomplished by destroying the sugar industry, but rather through the creation of other productive sectors or agro-industrial bases so as to avoid dependency on a single product.  The bad decision to close sugar mills occurred in the very moment when it was booming and expansion of ethanol in an international scope was occurring; which suggests a lack of foresight and resulted in the lack of one important source of income for the country.

The economic determinations of a state should be subject to satisfying the needs of citizens and always oriented towards that purpose, it is not fair or smart to subject them to the irresponsible or irrational whims of one person or group of them in detriment to the well-being and quality of life of the majority.  Another element of importance is evidenced by the potential loss of sugar traditions by reducing the number of employees involved in agricultural industry; moreover, the waste of the resources invested in developing intangibles over the centuries to foment sugar culture.  Equally it seems they forgot or ignored the importance of multiple sugar mills to insure sugar culture areas that are as near as possible to the mills.

In the newspaper they also pointed out the reduction in price for inputs and the doubling in what independent producers are paid for a ton of sugarcane. Here I go back to the old proverb “better late than never”, but why did we wait this long?  It would be good if the population knew who sets the prices for plows and other agricultural implements.  The extinction of the Sugar Ministry transpired as well and the creation in its stead of an Entrepreneurial Group of the Sugar Agro-industry.

In the same way, they mentioned the deficiency in diverse aspects in the Ministry of Agriculture and “(…) the approval of instructions from the President of the State Council and the Ministers to shed light on the general policies and work plans of the entities, Organisms of the Central Administration of the State, other national entities and the Local Administrations of Popular Power.”  Isn’t it the excessive centralization that has damaged ostensibly their development and prevented the positive functioning of Cuban society in the economic, political and social realms?  So many contradictions persuade us that we cannot advance with the controlling way of thinking of the mega-proprietors of a country.

Production is stimulated precisely by decentralizing and interesting workers in a common project, and in the results of their labor, the opposite of what they have done for more than 50 years and apparently intend to continue doing.  If they are unwilling to institute the foundation so society grows and develops healthy in support of better individual and collective productive yields, it is time for a real liberation of mindsets and a transition towards more just and efficient models for the development of Cuba.