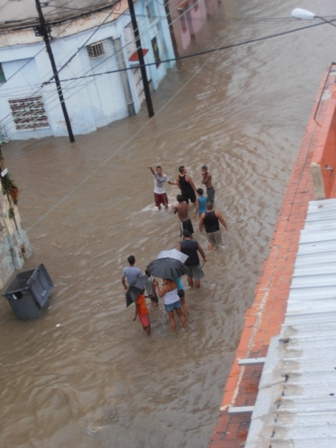 On Saturday, August 11, a strong rain caused floods in the capital’s Central Havana neighborhood. It rained non-stop for three hours and as a results of the garbage in the streets and the blocking of the sewers, the neighborhood of La Victoria remained under water for several hours.

The residents ran around getting their furniture and appliances to safe places to protect them from the water. Those who didn’t have time to safely store their belongings had no alternative but to watch their things destroyed.

The contents of the dumpsters on the corners which are always overflowing were swimming in the water and the trash was floating in the streets. After taking several pictures and when the water started to go down I went out to talk to several people and the discontent was widespread.