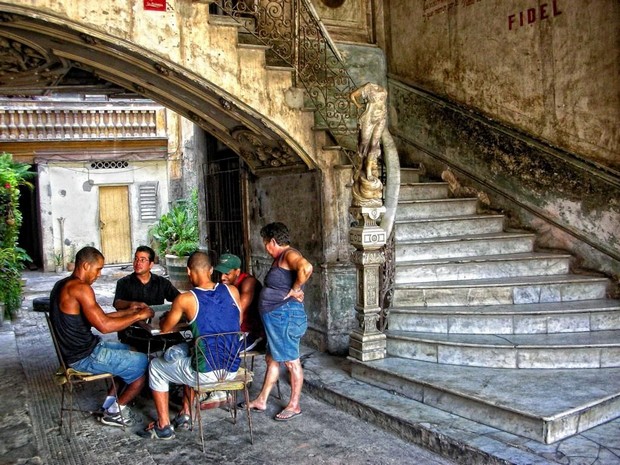 The fiery debate and emotions around the reforms of General Raul Castro were circumscribed to the air-conditioned rooms of the Palace of Conventions, where between April 16-19 the five commissions of the Sixth Congress of the Cuban Communist Party were in session.

Cubans warily followed the central report and saw on the TV news the abstracts of the linguistic, rather than political, debates of the different commissions debating the future of Cuba. At the end, as a common practice, the 986 delegates unanimously approved the economic policies proposed by Castro II to straighten the bow of the already cracked olive green ship, which with 52 years of sinuous navigation is at great risk of sinking.

The communist delegates can feel the sublime over-enjoyment of the spectrum of supposed controversies surrounding the economic plan to be executed in the next five years.

A lot of delegates, probably, believe without any doubt in the project designed by the economic tsar Marino Murillo and his troop of technocrats who, during four days, traded the military uniforms for elegant white guayabera shirts.

Some of them preferred to remain silent. Maybe they have a lot of doubts and decided to wait to know the amount of truthfulness involved in the Castro II proclaimed democracy in the Cuban Communist Party. In Cuba it is always right to be cautious in political matters.

Not always when the bosses fire the starting gun so that the political commissioners, official journalists and partisans will talk and unreservedly criticize the status quo, is it a signal of a change in the leaders mentality.

On the island naivety is a sin you can’t commit. Because the mandarins who today say that not everybody has to raise their hands at the same time to support one of the revolution’s projects, it is still the same ones who are written on a black list of those who criticized their decrees and those who, in their eagerness to be creative, contributed with their own ideas.

The people on the street are not fools neither. The VI Congress touched interesting points and the regime anticipated opening a little the iron fist that monitors citizens’ lives.

But everything here is still the same. Maybe worse. The money doesn’t want to land in the wallets. The food is more expensive every day. And the salaries are still frozen in time, in spite of inflation and the shortages.

Out of the party’s meeting, the common person got as a result the imminent authorization allowing him to buy and sell cars and homes. The homes part of the deal sounds weird: although on the island 90% of the families own their homes, by official decree they couldn’t transfer them and if they left the country, the government took ownership of their properties.

Amending the front page (it seems), now the common Cuban citizen waits for more concessions. Like the permission to come and go from the national territory, the decriminalization of political dissent or, at last, access to the internet from home.

I doubt that Castro II will fulfill those wishes. He is not Aladdin. He is only a politician who turns back, knowing that opening the fist too much may trigger a cataclysm that may end the personal revolution made by his brother Fidel.

This, socialism, has to be preserved by all means. Making controlled changes heavily reined in, therefore the beast don’t run away out of control.

Then, at the end of the day, people who for breakfast have coffee without milk, who are the majority in Cuba, didn’t see themselves represented by the “polemic” delegates, who either keep on silent or ignore the bunch of rights and civil liberties claimed, not only by the dissidents, but by the Cuban citizens while waiting in the long lines at the local grocery stores, or in the interior of the collective gypsy cabs.

The regime’s propagandistic marketing wants to sell us the idea that the Congress happened in a rush of constructive criticism, a kind of tropical Perestroika and the new popular ideas that will nurture the homeland’s economic future.

I am afraid not. Certain things had changed. There’s a glaze of blackness and more skirts in the Central Committee. There will be fewer revolutionary marches and empty political speeches. They will issue more permits to open small variety stores or to sell bread and mayonnaise and pirated compact discs without so much effort. And that’s it.

Photo: Jutta Winkhaus. Playing dominoes at the side of the stairs leading to La Guarida: the famous “paladar” (a private home restaurant with a few seats) which is located in and old run down mansion in a poor Havana neighborhood.