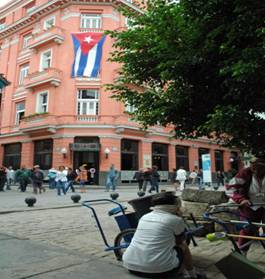 Several months have passed since the First National Party Conference and, as expected by the thinking part of the population, few remember it. In its basic draft document there are no plans, no agreements, nothing about the important problems which one would assume must be their reason for being, and it’s all diluted by generic declarations and internal adjustments to maintain their monopoly on power, trying to leave behind the deadly exercise of voluntarism and the strong-man rule of prior years, which cost the institution so much credibility and prestige.

They maintain and defend the absurd equation of nation-country-revolution-party-socialism, unnatural and unscientific, like the only unity possible, leaving no space for the emergence and development of civil society, the real guarantor of the present and future of the country.

The greatest straggler on the government’s agenda — the democratization of the political system — which is also the greatest challenge for the authorities, continues to be ignored, as if as long as they don’t talk about it or deal with it, it won’t exist. Most people agree, although they are still afraid to say publicly that the political, economic and social structure have to change, and that updating the model isn’t enough, as it’s an action that is only skin deep, more to gain time than to solve existing problems.

To continue to ignore the political plurality of the nation, hiding behind a supposed virtual unity very few actually believe in, instead of facilitating the peaceful, orderly and civilized transition we all crave, will generate violence and confrontation that no one wants.

New times require new answers, different models and the participation of citizens in the decisions taken and their implementation. To defend, despite multiple failures, obsolete and outdated concepts that divide Cubans into hostile camps, is both unintelligent and immoral.

To emerge from the current crisis it’s necessary to share political power, allowing all political tendencies to participate, each being as Cuban and patriotic as the other. Before imposing a project from the monopoly of power, you first must ask citizens, “What project do you want for the country?” If true power lies with the people, as they constantly repeat, then power is made up of citizens with different political, ideological, economic, social, sexual, artistic, viewpoints, all valid and respectable, and they can not be excluded, must less can someone impose themselves as the only representative at the expense of all others.

The path to solving the national crisis does not run only through a process of slight economic reforms, but through a true political and social democratization, that opens the roads to citizen initiative without restrictions of any kind, allowing Cubans, all Cubans without exclusions, to responsibly build their present and future.