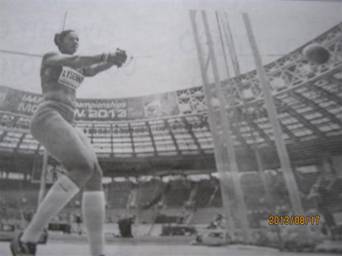 The 14th World Athletics Championships have concluded and the Cuban delegation, composed of twenty-four athletes, managed to get only a silver medal (men’s triple jump) and two bronze medals (women’s shot put and high jump). The medal hopes pinned on the other members of the delegation, of both sexes, failed to materialize. According to the commentators, this was the worst performance by Cuba in these championships.

I think that the Sports Commissioner, officials, coaches, and trainers are now doing the necessary analysis and drawing the appropriate conclusions to explain the bad results. Since I am not a specialist, I don’t dare write about the possible technical deficiencies that influenced them. But as a spectator I can offer a general conclusion: in a country where everything goes wrong, sports cannot be the exception.

Overall deterioration has been a constant during the past fifty-four years, and has affected agriculture, industry, transportation, fisheries, health, education, public services and even the decline of social discipline and loss of civic and moral values. How can we expect sports to escape this curse?

What has led to the current disastrous state of sport? Narrow thinking that will not allow athletes to participate on teams or at events where professionals compete; obsolete and badly maintained sports facilities; lack of necessary equipment; poor training conditions; poverty wages; the preponderance of political over sports concerns; the requirement to win at all costs; and other absurdities and aberrations. This is not only true for track and field, but also in baseball, soccer, volleyball, basketball, swimming and other disciplines.

Our athletes — the least free, most politically pressured, and lowest paid in the world — have no real incentives that guarantee their standard of living and that of their families during the few years they are active, and worse, a stable and decent future when they retire. It is not enough to compete (here the verb is replaced by combat) with the heart (which we know no one can compete without), but also with the chest, legs, arms, and all other body parts, well trained and in optimal physical and psychological condition.

There can be many explanations for the debacle, and once again the Empire and the Blockade can be blamed, but until we grab the bull by the horns, and not just give a new twist to the existing archaic conceptions, but replace the slow and fearful steps now being taken by long and courageous strides, neither sports nor anything else will escape the current quagmire. The solution here, as with all the other problems, lies in reason rather than emotion.