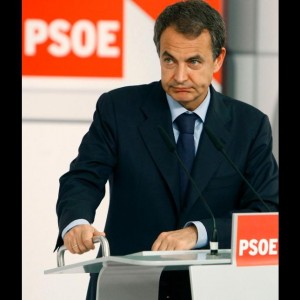 If the democratic left in the world wants to take lessons of what not to do in state policy, please look to Spain. History tends to fickle twists. And perfect anonymous types, after death, joined the army of sacred cows. Also the inverse. Distinguished in life, when God took them, they were despised.

But however it is analyzed, Jose Luis Rodriguez Zapatero passed into Spanish political history as a pariah. He fled through the kitchen door on the night of November 20 when the numbers confirmed the victory, announced months in advance, of the People’s Party (PP) leader Mariano Rajoy.

He didn’t even show his face. He passed the dynamite with the fuse lit to that political suicide named Alfredo Rubalcaba. Who, perhaps because he’s a dreamer or to enforce party discipline, agreed to become a puppet shooting blanks at his own electorate, who defected from the disillusioned Socialist ranks.

Rubalcaba had to throw in the towel. For political ethics or decorum. If he really wanted to redeem the PSOE he would have had to take the knife of criticism in his hands and make dust out of the bad management of Zapatero’s government.

It was more than a punishment vote for the PSOE. It has also been a valuable message that their imperishable record for modern politicians is recorded in ink. The government lie to buy time in the presidential chair is paid for by the political death.

Zapatero in his last term was irresponsible. And a coward. He put his ambition for power first, before telling the truth about the Spanish economic crisis and implement the harsh cuts in haste.

He played the game as if his people were a puppet in the hands of a giant. The final story of the Spanish executive reminds me of the battle of Waterloo. Historians tell us that an indecisive and obedient general obedience was incapable, despite the reality of the terrain clearly showing otherwise, of contradicting Napoleon. He complied with his orders and thus was defeated.

Have done the opposite and moved his troops and the history of the battle, of Napoleon, and, why not, France and Europe could have been written in other terms. Therefore, political shamelessness is attributable not only to Zapatero. And also his whole team.

I don’t know if it’s accurate to say that the PP won the race on its own merits or that PSOE lost because of gross political errors. Looking at the numbers, the number of PP voters increased a few thousand.

The disaster is among those who always supported and believed in the socialist Iberians. 4.5 million voters failed to vote for the PSOE. If Zapatero had been a high-caliber leader and faced the vagaries of the whole crisis, perhaps the story would have been different.

We have an example in the CiU. The Catalan party understood a series of hard cuts, necessary and unpopular. However, this 20-N came out of the polls with it head held high.

The new Spanish president, Mariano Rajoy, has a real timebomb in his hands. The Galician and his team will have to split hairs to overcome the harsh crisis that goes beyond the economy and attacks the poor performance of political institutions, democracy and European sovereignty.

As for Cuba, it’s bad news. In the political and military sectors of the island bilateral relations with Spain are going to be tense.

In any international forum where there is a representative of the new Spanish government, Cuban officials will have to keep their heads down as they listen to repeated discourse about respect for democracy and human rights.

Latin America is waiting. For many radical left-wing governments in the region. Cuba is part of their agenda. Spain already left behind the days when it was the second largest investor in the continent. China passed them at supersonic speed while sticking out its tongue. And Brazil is on track.

If Rajoy goes ahead and finds a solution to the crisis and tempers his foreign policy objective without hysteria he will be a giant. Jose Luis Rodriguez, for his part returns to his lair. Zapatero, back to the drawing board.

Photo: EFE. Jose Luis Rodriguez Zapatero during the ceremony held in July 2010 to commemorate the tenth anniversary of his election as general secretary of the PSOE.