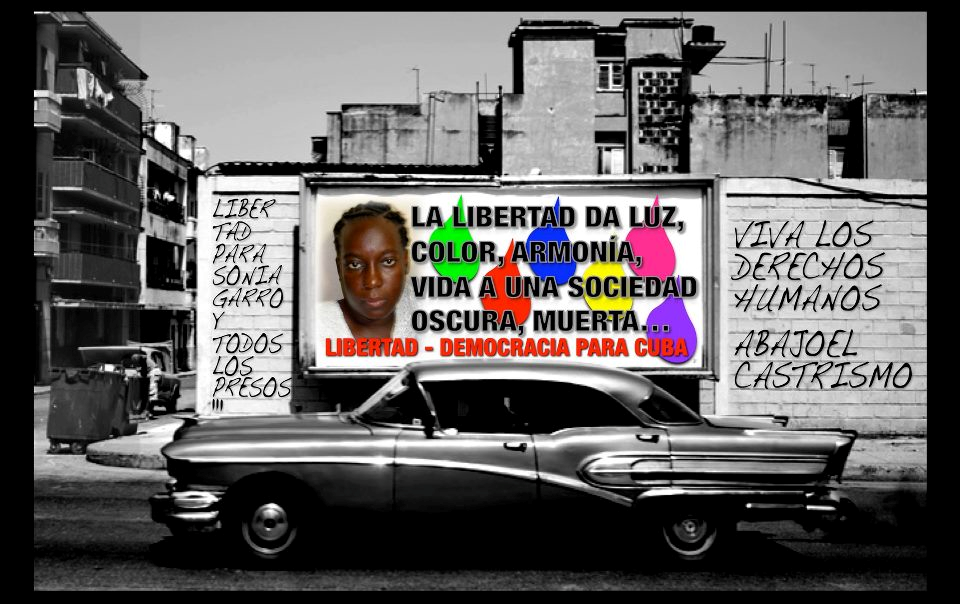 A year ago, while preparing the official pomp to receive Pope Benedict XVI, elite troops from the Ministry of the Interior violently assaulted the house of the dissident Sonia Garro Alfonso, in the Los Quemados neighborhood of Marianao, in western Havana.

It was a spectacular operation. All the neighbors still remember what happened. “There were guys dressed like anti-riot troops from American movies. They used rubber bullets. They employed exaggerate violence, arresting Sonia and her husband Ramon. They took them and almost all their belongings. It was incredible. They treated them like they were terrorists,” one lady commented.

Sonio Garro’s path towards dissidence is marked by poverty and racism. “In my childhood, the happy moments could be counted on the fingers of one hand. I was the tenth daughter of a poor family of twelve siblings. I grew up in a violent slum. I never had toys at Christmas. I always had worn out second-hand clothes that were given to my mother by charity. I went to school with old broken down shoes, but with an immense will, thinking always about studying and bettering myself to change my fate,” Sonia told me in 2009.

She suffered racial discrimination while pursuing her lab technique studies. “I lived racism first hand. I remember one day I wanted to lodge a complaint at school and the vice principal of the center told me, “Go where you want, you’ll always be black.”

When I graduated, with a gold diploma, there was a ceremony in the Astral Theater. The Minister of Public Health came to deliver the award for the most outstanding student and an official came over and told me another person was going to collect it for me because my skin was so dark I wouldn’t look good in the photo. ’No offense, it’s not racism, but you’ll spoil the picture,’ he said. I never collected that award,” she told me in an interview I did with her at her home.

Later she was expelled from the polyclinic where she was working for having married an opponent to Fidel Castro’s government. She learned to sew on an old machine from the ’50s, to make a living and support her daughter, Elaine.

“And from the door of my house, while I sewed, I could see girls of 13 and 14 prostituting themselves. I also saw several accidents with children who were playing without their parents watching them. So from there was born the idea of creating a community project, where the little kids could entertain themselves, play and interact with others without danger,” Sonia said.

On February 27, 2007, Garro created the first independent center. In her home. She had some 20 kids between 7 and 15. It was free. And it didn’t matter if their parents were revolutionaries or not.

“The first rule was no talking about politics. I organized activities of drawing and sewing and my husband, Ramón Alejandro Muñoz, a musician, was in charge of choreographing dancing and teaching the kids to play musical instruments.  On the weekends we had parties and shared children’s books and toys. Foreign NGOs helped us with materials and medicines, as did embassies and individuals in a modest way, giving us what they could,” explained Sonia while showing me photos of the activities.

After that initial experience, Garro went for more. She opened another center in the slum area of Palenque, in the municipality of Marianao itself. What seemed like a noble action within society, which would bring more benefits than problems, triggered an earthquake on the part of the State Security. “The government’s response to my social work were three acts of repudiation and a couple of beatings. The last act of repudiation did not work, no one in the neighborhood attended. They left empty-handed.”

Much happened in those four years. Her community projects closed due to harassment by the Special Services. Sonia Garro then joined the marches of the Ladies in White. And also half a dozen seasoned women, who featured in street protests demanding respect for political rights and demanding democracy.

Her husband Ramon was not far behind. In May 2010, desperate because he didn’t know where Sonia was being detained, he climbed to the roof of their house, still under construction, with a machete and began shouting slogans. The indignation of this Havanan was recorded and uploaded to YouTube. Recently, from the Combinado del Este prison he wrote a letter (they are kept separate).

It has been 12 months that this couple has been in jail. They live in an authentic legal limbo. Officially they are accused of public disorder and attempted murder. But there is no trial date.

Yamilé Garro Alfonso is the mother of two young children. She was a simple housewife, who now takes the place of her sister in the marches of the Ladies in White. Every week or every two weeks, according to the visits, she loads heavy bags of food and toiletries on her shoulders and heads for sometimes to the women’s prison, Black Mantle, other times to the Combinado del Este prison. In her tenement room in San Leopoldo, she also cares for Elaine, the daughter of Sonia and Ramon who will soon turn 17.

The controversial dissident of the barricade is strongly suppressed by the tough guys of State Security. Raul Castro does not want the opposition to take to the streets as public platform for their demands. The General knows that could trigger a domino effect among ordinary Cubans, tired of living with a future in quotation marks.

The only way to pressure the regime to release Sonia Garro and Ramon Munoz is a strong international campaign. There is no other way.