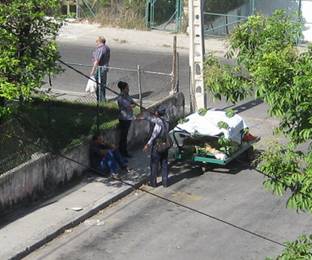 A street vendor being detained.

A recent tour through Nuevo Vedado revealed shortages at the area’s produce markets. It is worse in the state-run stores, where shelves are completely bare, while those still in use hold little merchandise. The situation is better in the private markets, where the available merchandise is of better quality, the selection is greater and, as you might expect, the prices are higher. In spite of constant harassment by authorities, the so-called carretillero, or street vendors, also offer wide selection and good quality, though also at higher prices. People ask, “What’s going on?”

It seems that, in spite of “the successful accomplishment of established goals and productive achievements” touted by the official media, the reality is quite different. Once a week potatoes — a crop completely controlled by the state — will appear on a few shelves at state-run markets, prompting long lines. Stores have been unable to guarantee a steady supply.

Without steady production there cannot be a stable supply. If the systems for harvesting and distributing a crop are not working properly, the product will not reach the consumer, to whom it is ultimately targeted. Until production, harvesting and distribution of crops is freed up and everything is transferred to private hands, trying to preserve the state’s monopoly against all odds will not produce results. All the efforts over many years at getting the system to work have failed. It has proved inefficient. Now is the time to abandon it and stop playing around with the nation’s food supply.