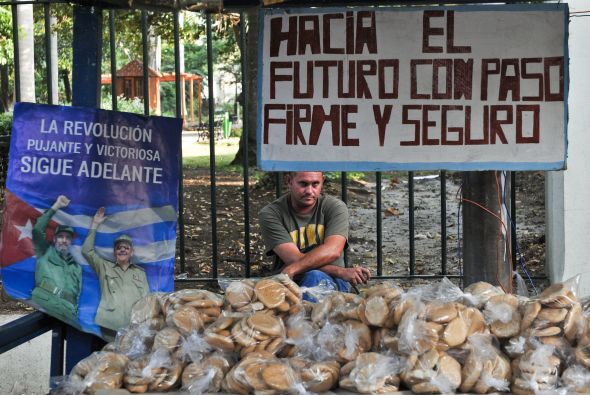 The signs in the photo read, “The Revolution; Thriving and Victorious. Keep Moving Forward” and “Towards the Future with Firm, Confident Steps.”

Whenever the subject comes up, I remember an anecdote a friend once told me. One morning in March 1968 he and an uncle, the owner of a small fruit stand, opened their store early. The story behind this hard-working man was that he had gotten his start by making the rounds of the major streets in Artemisa, selling fruit from a pushcart. Little by little he made improvements to the cart until he was at last able to rent a storefront and transfer his operation to that location which, after many years and great sacrifice to his family, was finally his. But as he was waiting on his customers on that fateful morning in 1968, an official dressed in olive green and carrying a briefcase appeared at the doorway.

“Are you the owner?” the official inquired.

“Could you please step outside?” the official asked from the doorway.

When the owner went out, the official crossed the threshold and once inside said, “This property has just been expropriated by the Revolution.”

And that was that. My friend told me that the former owner could not go back in even to get a chain that he had left at the cash register along with his wedding ring a few minutes earlier.  Like thousands of other Cubans he was dispossessed of the small family business in which he had invested so much over many years. The old folks tell me that after the so-called “revolutionary offensive” you could not find so much as a fried croquette for sale on the streets.

A recent State of Sats* panel focused specifically on the current state of self-employment in Cuba, a sector whose fundamental dynamics vary depending on what stage of post-revolutionary history we are discussing. Panel members recalled the various phases of uncertainty this sector has gone through to get to where it is today. Many of us remember the circumstances under which this economic alternative was “officially” introduced. At the peak of the Special Period it served as the government’s exit strategy, an escape valve used to relieve the extreme pressure that had built up. I myself remember the giant headline printed at the time in Granma: “Self-Employment Is Not an Economic Solution.” In other words, though they promised to take the policy seriously, government actions in the early years refuted that pledge, making the whole thing seem farcical.

We all witnessed how, as soon as it started feeling more confident, the government began to impede development in this sector by imposing all sorts of restrictions, designed simply to force the self-employed out of business. Faced with the inability to pay the excessive taxes demanded of them and with bankruptcy as their only other option, thousands of small business owners turned in their commercial licenses. There was, of course, political motivation involved. It was about needing definitive proof that private businesses could not compete with the immaculate efficiency of socialist businesses. In the meantime, the government maintained a rigid policy of denying all new applications for commercial licenses for most activities. It was a policy that continued into the following a decade and one whose results are still felt today. It meant that only those businesses that were profitable enough to pay sky-high prices for raw materials on the black market and bribes to inspectors and police officials survived. It also led to widespread moral decay in society in general, a condition which still afflicts us today.

The government claims that this time it has the political will to guarantee a different outcome. But there are indications — some subtle, some overt — that hint at the real intentions covered over by the tone of official rhetoric. For example, there is still a body of legislation on the books giving legal authority to agencies such as the Office of Public Prosecutor to bring charges against individuals — whether they be agricultural producers or newly self-employed workers — who only find out about it after they have lost the shirts off his backs.

Most authorized businesses, which generally are required to show proof of purchase, still have to cope with the insurmountable obstacle of sky-high prices for supplies and raw materials, making any attempt to turn a profit into a joke. The state remains the sole supplier, a situation directly at odds with changes made early this year to the emigration policy. It means that a producer is not allowed to directly import supplies even when it is possible for him to do so. This stands in stark contrast to the “analogous” examples of China and Viet Nam, where such transactions are easy.

Entire crops rot in the field because of the inexcusable irresponsibility of the National Stockpile Corporation — the only body of its kind authorized by the government — which so fears intermediaries that it has never indemnified anyone. Real autonomy has never been granted to these new enterprises, which remain subject to the ludicrous operational methods of the ineffective state system. This is also the case with transportation cooperatives, whose members are prohibited by law from owning their means of production, just one of thousands of problems too numerous to mention here.

In short, I have the impression that the current situation is fundamentally not much different that of the past. When a business fails, it can be attributed to poor management by the owner. But, if we see a massive trend occurring, then we are talking about ineffective management affecting an entire country. Surely we Cubans are not that bad as administrators, especially when it involves risking our meager savings in a family business.

Those who formulate such policies understand mathematics yet have nevertheless designed a dysfunctional system. They doggedly insist on sticking to it because their ultimate goal is not to assure the success of these “nano-businesses.” Rather it is to impede them so that prosperity might be achieved through a management system that has wasted decades through inefficiency and administrative indifference, all of which began on that fateful day in 1968.

I hope I am wrong but, as long as we continue on the current course, I have a feeling self-employment in Cuba, as represented by the small family-run business, will be the key element in a future disaster. 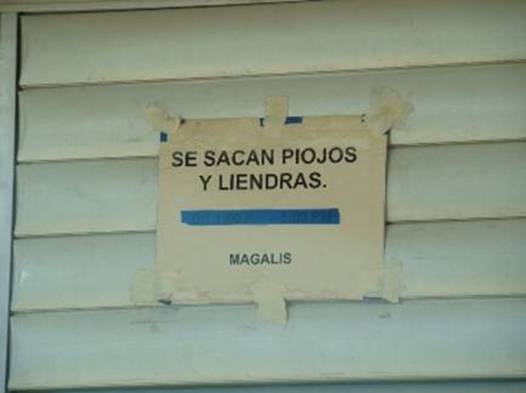