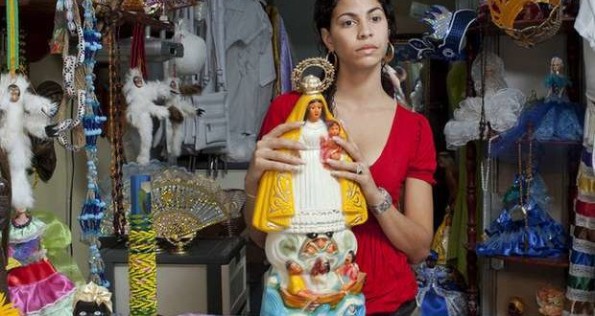 Ivan Garcia, 28 October 2015 — The smell of pine and varnish permeates the narrow building where Idelfonso and his three assistants sculpt a collection of bowls, amulets and gadgets used in Santeria initiations rituals

The studio is air-conditioned and the high quality of his work has allowed Idelfonso to renovate his house and buy a fourteen-thousand-dollar Soviet-era car with a diesel engine and German automatic transmission.

And he has no shortage of clients. “I have  Russian, Swiss, Cuban-American and even Japanese buyers. Santeria is expanding all over the world. And it has given rise to an industry to satisfy locals and foreigners who want to be initiated,” he says as he places a recently varnished figure of San Lazaro (St. Lazarus) in a closet next to other religious objects to be sold wholesale to an intermediary.

Although an autocratic Fidel Castro took a particularly belligerent stance towards the Catholic church, syncretic religions, Masonic associations and Afro-Cuban secret societies in the early years of the revolution, Cubans never stopped worshiping their saints.

In the houses of some of Castro’s most diehard supporters it was common to find an image of the Virgin of Charity and a small cabinet filled with offerings to some African deity right under a photo of Fidel.

Syncretism — the blending of one or more religions — is widespread in Cuba. Many Afro-Cubans have their children baptized in the Catholic church and later perform an itá,* consulting with their Santeria godfather by tossing pebbles and shells onto a wooden tablet.

When Fidel Castro was hanging by a thread after the fall of the Soviet empire, which brought down the satellite regimes of Eastern Europe in its wake, he devised a political strategy to bring Cuba’s various religious denominations into a new and powerful alliance.

The plan made perfect sense. The Americas has the largest number of Catholic followers in the world while many people in Central America, South America and the Caribbean worship indigenous deities or gods of African origin.

There began to be less talk of Lenin and Marx in Cuba. The national stage was opened up to a variety of religious beliefs, provided they were in communion with the regime.

The rise of Santeria and other religious beliefs that come to us from Africa has been augmented by a booming private-sector industry that arose to meet the demand for fetishes, sacrificial animals, religious imagery, prayers and potions.

The self-employment regulations adopted by the government in 1993 and expanded in 2010 by General Raul Castro allow herbalists, fortune-tellers and babalaos, or priests, to provide consultations, read Tarot cards and sell religious images.

Abdiel is one of them. For ten years he has been selling herbal medicines and Santeria necklaces in a stall a stone’s throw from the old bus terminal in La Vibora.

“I also sell wood carvings and animals specifically for religious sacrifice. Sales are good. I pay relatively little money in taxes to the state,” he says while sitting on a small wooden bench.

In the courtyard of a big house with high ceilings in San Miguel del Padron, Arturo makes money by selling goats, roosters and pigeons, animals commonly used in Santeria “endeavors.”

“I have been in this business since 1998. You can’t imagine the number of people in Cuba who are adopting Santeria. It might seem like a primitive sect for black people, but most of my clients are white and affluent,” says Arturo.

Jose Ignacio, a babaloa with thirty-five years experience, claims that followers of African rites outnumber local Catholics by a wide margin. “None of the three popes who have visited Cuba met with leaders of the Yoruba religion, even though the two faiths share the same saints.”

This Havana babaloa believes the Catholic hierarchy looks upon them with disdain. He notes that there are as many if not more white people practicing Santeria as there are black or mestizo followers. “It’s only logical,” he observes. “Whites often live better and have more money.”

In Cuba “becoming a saint,” or being initiated, is an extremely costly proposition. Reinaldo, a well-known follower points out that it can cost four to eight thousand dollars depending on the type of saint. “It shouldn’t be that way but many unscrupulous people have turned Santeria into a very lucrative business,” he says.

For a foreigner the cost is even higher. For Frank, a Canadian who is married to a Cuban woman, getting initiated cost him $13,000. “And what’s worse, I’m still spending money,” he complains.

Becoming a saint in Cuba has gone from being a spiritual need to being a fashion statement, a socially acceptable way of displaying a person’s affluence. Behind the scenes an empirical and highly profitable industry makes it all possible.

*Translator’s note: A ceremony conducted on the third day of consecration in which the past, present and future is discussed with the initiate and shells tossed on a table are believed to carry meaning.