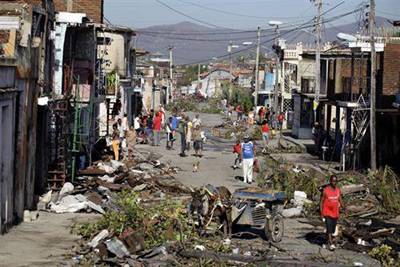 This Sunday, one week after the hurricane, the TV of our planet set aside more than 2 hours of the Arte 7 program to present Sandy’s making off, which emphasized the government’s effort and aid to the affected eastern provinces, especially the devastated city of Santiago.

The images shown after the hurricane are conclusive proof of how bad the living conditions were and how badly the most affected installations were, like the electrical and telephone infrastructure, the grocery stores and others.

It seems the TV program wanted to “cover up” the many growing commentaries about the government’s abandonment, instead emphasizing the revolutionary solidarity, praising the dispatching of food, maintenance brigades, doctors, etc, to the affected provinces. It is logical in situation such as this one, but when it becomes a routine practice, it is not normal. Undressing one saint to dress another is an old political scheme practiced for more than five decades.

If something is crystal clear, it is that there are no available resources to respond to any type of meteorological phenomenon the way the government propaganda wants us to believe.