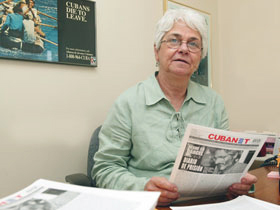 Havana, Cuba, October, www.cubanet.org – It was a great achievement by Rosa Berre (Havana, 1941 – Miami, 2006) to publicly expose the mass media of Fidel Castro, whose writers were willing to lie in exchange for crumbs.

When, at the beginning of the internet, with the help of an old computer, a fax machine, her ingenuity and her strong personality, she thought about organizing a group of reporters that would write about the truth in Cuba, from the lion’s mouth, many thought that she was insane.

Who would dare to report about the situation of political prisoners, the inefficiency of leaders in governing the country, the systematic violations of Human Rights, the opinions of citizens, and everything that the national press hides?  And what would happen to those who had such tremendous audacity?

From her home kitchen in Coral Gables, Florida, at the beginning of 1994, that lady with a sweet demeanor, but energetic, founded the page Cubanet: A refuge to all those who, marginalized, couldn’t put to use the freedom of speech, a truthful challenge to the long political hand of Castro, that could reach up even from their own neighborhood.

In that year Rosa made her wish come true and as months passed, that group of brave people increased in numbers and professional quality, with the goal of having a Cubanet with a power to influence the emergence of a civil society and inform the world of the Cuban reality.

The history of Rosita, as we used to call her with love and respect, is not well known.  She graduated from the Normal School for Teachers, she studied journalism at the University of Havana, and since she was very young she belonged to that generation that trusted in the Revolution of 1959 as a solution to solve social injustices.  She worked at the Periodico Hoy, which disappeared in 1965, and at the end of the 70’s woke up from the romanticism that so much pain caused to many and she was accused of having “ideology problems,” along with her life companion Carlos Quintela, who died in exile in 2001.

Both of them were expelled from their jobs and punished by being sent to do, agricultural work in Pinar del Rio; they were called “reprobates” by Raul Castro, but they kept going “…with the dignity of those who break with the Revolutionary fallacy from power,” as  our Human Rights champion, Ricardo Bofill, expressed it.

In 1975 Rosita started doing crafts. Looking for the scent of freedom, in 1980 she, her husband and their two young daughters entered the Peruvian Embassy, where this family, dignified and honorable suffered for many long days perhaps the worse nightmare of their history.

Then, she suffered in the flesh the ruthless policy of Fidel Castro of inciting the Committee for the Defense of the Revolution masses to beat and harass everyone who preferred to leave Cuba, in the so-called “acts of repudiation.”

With that bitterness, with that traumatic and sad experience, Rosa and Carlos together undertook the arduous path of exile through the Port of Mariel, from where, in April of 1980, more than 125,000 Cubans began their exodus to the United States.

Today, almost twenty years after its foundation and seven years after Rosa’s death, on 19 October 2006, Cubanet continues their work to support the independent press and the right to freedom of speech and promotes the strengthening of the Cuban civil society, “… a legitimate element of democracy,” as stated by professor Vaclac Havel.

With the physical disappearance of Rosa, many in Cuba thought that Cubanet would also disappear, but, perhaps as if with unknown invisible threads the great friend, committed to Cuba’s freedom, is still protecting us; Cubanet continues to keep her legacy alive.  Needless to say, each new published text in this page constitutes a tribute to Rosa Berre.