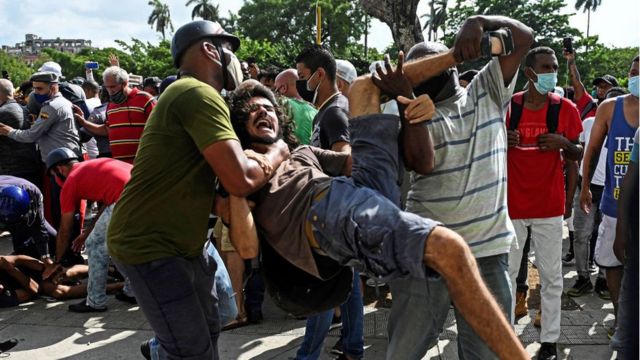 Cubalex, 24 September 2021 — In our work of informing and advising Cuban citizens, we share this interview with our lawyer Julio Ferrer about the role of judges in the proceedings against the July 11 demonstrators.

What is the function of a judge in the proceedings that are under investigation, with respect to the guarantees of due process, for example, or the presumption of innocence and the burden of proof?

The last paragraph of Article 109 of the law itself entrusts such functions during the investigative phase, exclusively to the prosecutor, by establishing, I quote: “during the processing of the preparatory phase, the prosecutor will also supervise compliance with the law in the execution of the actions, proceedings, and procedures as well as in the legal qualification of the facts, will follow the course of the instruction and when it is necessary it will have the practice of actions and proceedings essential for the verification of the crime, the determination of the author and other essential circumstances or the it will carry out by itself and will ensure respect for the procedural guarantees of the accused, for the protection of the rights of the victim or injured party, for the crime and for the interests of the state and society.”

From my point of view, such a rule itself creates a conflict of interest, since the prosecutor must not, in strict observance of the guarantees of due process, assume two functions that are totally opposed: representing the interests of the state by taking criminal action against a citizen who allegedly committed a criminal act, while at the same time being the watchman who makes sure that the citizen’s guarantees to due process and the presumption of innocence are observed.

Do judges have legal tools in order to supervise the actions of prosecutors and police officers in the event of abuses or excesses in the exercise of their functions or authority?

As I explained in the answer to the preceding question on the prosecution system in Cuba, the judge has no role whatsoever with respect to criminal proceedings when they are in the investigative or instruction phase, since the prosecutor monitors the investigative phase, judges do not have any legal tool to supervise the actions of prosecutors or police agents in case of abuse or excesses in the exercise of their functions and powers.

It is necessary to clarify that in the prosecution system in Cuba the judges hear the case from the moment they are presented to them by the police or the prosecution in correspondence with the crime that is charged to the accused. Phase of the process in which the judges, that is, the court must control the legality of the actions carried out during the investigative process and if they do not comply with the established legal norms, the case can be returned to the prosecutor so that they can be corrected. granted to the judges by Article 263 of the criminal procedure law. Faculty that as a general rule, judges do not use.

Are judges obliged to respect the Constitution and the international human rights instruments to which Cuba is a party?

Yes, but the obsolete and still in force criminal procedure law does not impose on the judges the duty to carry out a constitutional or conventional control of the cases they process and resolve.

In deciding criminal appeals, can the judges impose a harsher sentence [than the one imposed by the lower court]?

In criminal law, an ancient principle that has come from Roman law prevails, and that is that the appeal must never be detrimental to whomever intervenes, that is, to the appellant, that is to say that the judges when resolving an appeal, will never do so in a way that aggravates the situation or the sanction imposed on that appellant or recurring sanctioned person. It is necessary to explain in this matter that there is a case in which the appellant’s situation may be aggravated and that is when, in addition to the sanctioned, the prosecutor appeals requesting the aggravation of the sanction imposed on the accused and the prosecutor’s appeal is successful.

We have recently seen prosecutorial petitions in which the victim is a witness and the only evidence to destroy the presumption of innocence of the 11 July protesters, is it correct that the courts (judges) receive cases like this?

It is not illegal or incorrect for the court or the judges that comprise it to receive and admit to processing a criminal proceeding in which the only evidence to destroy the presumption of innocence is the testimony of the victim without further witnesses or other means of proof. Well, it’s not about quantity but quality. In other words, it is possible that this single testimony has such forcefulness and evidentiary quality, capable of destroying the presumption of innocence.

Are the courts in Cuba independent and autonomous?

The courts in Cuba are not autonomous or independent at all, as the president of Uruguay explained at the CELAC conference, despite the fact that the constitution in Articles 148 and 150 provide for it. In reality, the opposite occurs, since the law of the courts in Article 1 establishes that the courts are subordinate to the National Assembly and the Council of State and receive instructions from these bodies through their governing council.