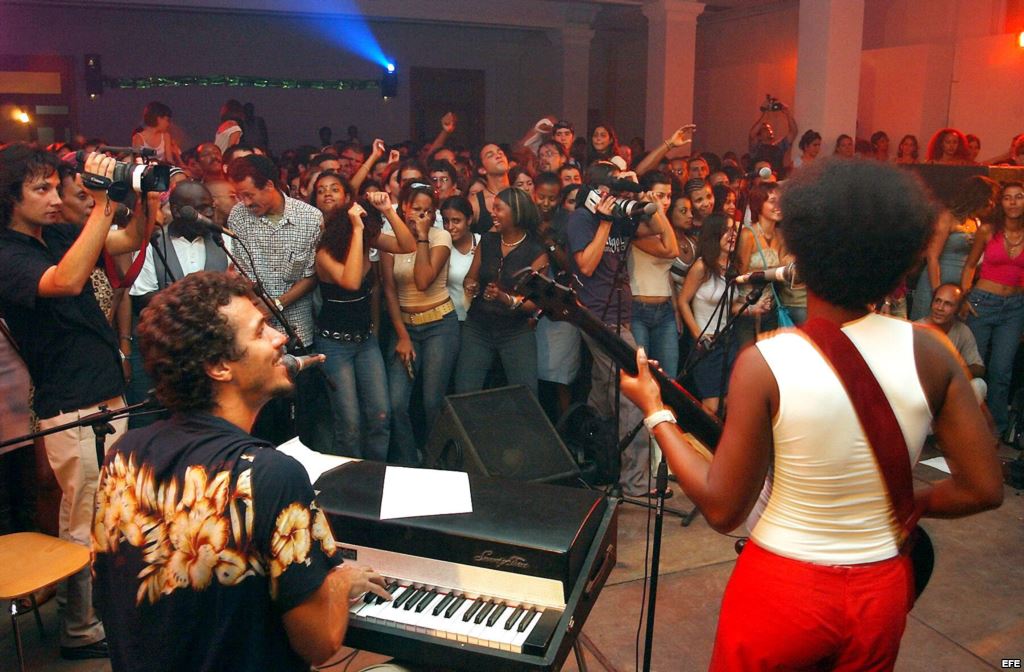 Roberto Carcasses at the piano. Photo from Cubanet.

I am happy and confident that at some point in the future, the world’s dictionaries will exclude some words, among them Ideology and Dictator. By then, most fortunately, no one will speak of Fidel, Hitler or Pinochet; and in the schools they will continue mentioning names like Beethoven and Mozart, fortunately art transcends, as do performers.

No wonder, although there are always people who strive to get our attention and try to manipulate us from one shore or the other using bombastic verbiage, dangerous pandemic ideas and/or extravagant dress, that it was a musician, Robertico Carcassés, who hit the home run in the middle of the Malecon, during a political event held at none other than the José Martí Anti-imperialistic bandstand in Havana, the social gateway, also known as the “Protestdrome,” a plaza erected facing the United States Interest Section in Cuba, where the Cuban government sends its frequent, soporific and boring missives, with which it tries to show a false political strength and/or popular cohesion.

It is clear that the young artist, famous for his talent and his magisterial way of interpreting the difficult art of musical improvisation, does not live divorced from reality and knows with certainty the significance of each and every one of the words he chanted.

And it’s not the hair that’s bad, it’s that the comb is no longer working.  Free access to information, the manipulation of public opinion, the electoral system, the “blockade,” the internal blockade and lack of rights, are issues that constantly weigh on Cuban homes. And also in Robertico’s home which, in addition, in his case, suffers like so many other Cubans the mark of family separation. One of his sons has lived for some time in Miami.

Consciously or not the scope of what he said in his catchy improvised interpretation, the truth was that he made an impression, and now the question is, what will happen.

Well, if we put the event in context, using our brains and not our hearts, it’s easy to know that nothing will happen to the artist.

In the Facebook profile of his group, Interactive, it is announced that he would not perform this past Saturday, day before yesterday, at Cafe Miramar, nor will he be in Havana in the Bertolt Brecht theater hall of Vedado this coming Wednesday.

Also posted was a note, but then it disappeared, saying that the members of the group had been summoned to a meeting at the Cuban Institute of Music, where they were informed that Roberto is “separated the sector” indefinitely. A word too ambiguous that to my mind means an eighth note, because I am sure that very soon Robertico will again play and enjoy national and international stages, but now more firmly because he has shown that he is not only a part of that large group of outstanding musicians within a generation of monsters, as Cubans always say, that feels committed only to playing a musical instrument, it is also of those cabinetmakers who can chisel ,in a piece of the national wood, the sculpture of a new social life.