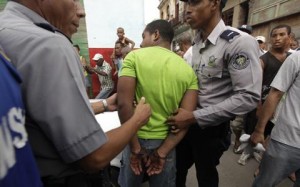 MIAMI, Florida, December 12, 2013, www.cubanet.org — The worst consequences of Cuban military repression were suffered on Dec. 10, International Human Rights Day, on the eastern part of the island. More than 130 arrests were made and about 160 peaceful demonstrators beaten according to the leader of the Patriotic Union of Cuba (UNPACU), José Daniel Ferrer, as part of preliminary action.

A member of the Ladies in White from Santiago de Cuba, Arlenis Alarcon Perez, had to be operated on as a result of being kicked by paramilitary groups. She is in serious condition and remains in intensive care at the Military Hospital after injuries to her solar plexus caused internal bleeding. The operation was performed late last night. The solar plexus is a vascular network that can burst from sudden physical blows according to the activist Martha Beatriz Roque Cabello.

Arlenis Pérez Alarcón lives at Castillo Duanie between 14th and Piñeiro streets in the Luis Dagnés district of Santiago de Cuba. She has been a member of the Ladies in White for about two months.

Meanwhile, in a telephone conversation with martinoticias.com José Daniel Ferrer, speaking from the Palmarito of Cauto district in Mella, Santiago de Cuba province, confirmed the use of tear gas against civilians, including children, in various parts of eastern Cuba. Ferrer said that in the Mafo district in Contramaestre the home of peaceful opposition figure Ovid Martin Castellanos was attacked twice. Ferrer said that many activists were in very poor condition in places where the attacks took place, Ferrer said.

Three drunken men attacked demonstrators. One of them was injured in the process and required medical attention according to the head of UNPACU.