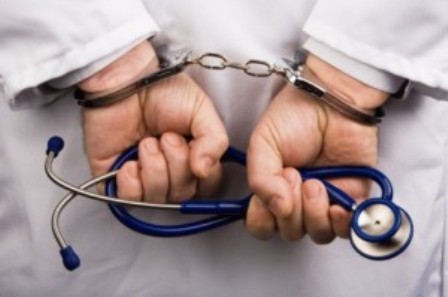 Talking about Cuban doctors today brings to mind a new kind of slavery, of sad pieces used on a chessboard. Through misfortune, the doctor Oscar Elías Biscet — a free man in the damp shadow of his cell — is hardly alone.

I believe that few professionals in the world face a situation more precarious in regard to individual liberties, than this army of doctors that in my Cuba of the twenty-first century are not masters of their own lives.

True: No one in Cuba is the master of their life. But the men and women in white coats, even less so.

I am thinking now about one more, one recently arrived in special conditions, pouring a drop into the receptacle of the outrageous. His name is Rafael Fontirroche, pediatric surgeon and he needed to make a hasty escape to the United States, and later on to denounce the corruption of the medical program in Nicaragua, to which he belonged at the time.

Obviously, the story of this surgeon isn’t anything extraordinary. It just joins the ranks of the doctors who, speaking of their lives, knowing the almost eternal punishment that awaits them, decide to escape from the countries to which they were sent by the Government and to remake their lives where they will be the true owners of them.

Everything began with a new economic strategy. The redeeming idea, the injection of a mountain of money in a dying economy, consists of forgetting about carnivals and coffee, forgetting about beaches and tourism, forgetting also about the army of computer specialists with which the Greater Antilles tried to lead a production of world class software. Forget any prior strategy… and look to the men of Healthcare.

Like everything in my island country: A visionary of power gave the order, and the whole nation undertook the task. It will be a bit more than a decade since then.

I seem to remember precisely those times when the medical euphoria had its main peak: I was studying in a high school in my city, year 2000, and suddenly a career until that moment difficult to obtain, privilege of the hardworking and talented few, was made available to everybody.

Entrance exams for careers in Healthcare, especially Medicine, become impossible to fail. The academic level to qualify for the profession fell spectacularly. The sign was clear: “We need to form a legion of doctors.” No matter what.

And later, of course, began the international proposals. Based on what? With what card up the sleeve? Well, with a controversial but true fact: the level of Healthcare professionals, in Cuba, is undeniably high.

We separate scarce technology from educational level. We separate the ruins in which one finds the hospital network in Cuba, with instruments and methods from the Jurassic period — that allow, for example, wrong cancer diagnosis like the one they gave me four months ago — from the talent and dedication that Cuban doctors exhibit in their daily work.

Starting from there, our Government very thoughtfully decided what to do with the destinies of these professionals. “They will be our soldiers in white lab coats” — said the Chief Comandante one time. And things were never the same.

Because soldiers only obey orders. And strict orders, unbreakable, under penalty of hard punishments and strict consequences.

They began to be sent to the most unexpected corners on the planet. Both to countries that established hard cash payments in exchange for medical service, and to regions hit by hurricanes, earthquakes, and so much disaster that they disappeared throughout the four corners of the globe, where the international political lobby was the only reward.

What do these altruistic doctors say, in support, when Cuban Television cameras put a microphone in front of them? They say: “I do it for love of solidarity.” They say: “I do it for internationalism.” And I, and many, are surprised by the skill in lying which has been inoculated under our skin in so many years of revolutionary socialism.

Because the truth is that those men of science abandon their recently born children, abandon their wives — who in many cases, from then on no longer will be — they leave their own lives in Cuba, because it’s the only way to raise their terrible economic state.

And they leave also, the vast majority of them, with heavy hearts bound for Pakistan and Haiti, bound for lands where cholera or poisonous snakes lie in wait for them, because they know well the blackmail underlying the order to leave: If they don’t do it now, if they refuse, they will never be called for “missions” in Venezuela, South Africa, or Bolivia. The countries where they could really make some money.

And let’s say once more “something” about money, because like in all cases, the leaders of their battalion, the think tanks of these solidarity missions, know that he who divides and distributes gets the biggest cut. The Cuban State business in Healthcare professionals is more repulsive by the minute.

Just to give an example: In 2010 the British Medical Journal classified as “slavery” the situation of certain Cuban doctors in Portugal who received a salary much lower than the minimum established in that country, in spite of the Portuguese government paying the same for them as for native-born professionals, the only difference being that they had to pay it through the Cuban Embassy.

In route to their hands the pay was reduced to a symbolic sum. Annoying.

However, since it will never be lower than what they are paid for hours spent in Cuba where the maximum they can reach after years of achievement and experience is around 40 CUC (roughly $40 U.S. a month), these tropical doctors feel themselves fortunate. And they shut up.

Nobody dares to protest. Those who forget their condition as state property and raise their voices against injustice have two routes: Ruthless sacking from their careers on the Island, where they will never return to be full professionals; or the destiny that the surgeon Fontirroche chose: Exile. Forever.

That’s why we then arrive at one of the central points of this condition of medical serfdom: since by grace of a presidential decision they become exclusive property “of the Nation,” nowhere on the globe exist beings with less possibility to emigrate in the usual way than them.

First: Because they are penalized with 5 years of waiting, at times more, until the fantastic Permission to Leave arrives in their hands. In this time they are sent to remote areas, mountainous, sparsely inhabited, as atonement for their sin of wanting freedom.

And next: Because in case they decide to “desert” from the assigned missions, the castle raises the drawbridge forever, and never again can they return to Cuba. They are converted into another crowd of exiles due to the decision of the big bosses of our Gulag.

Here I have met, by the hundreds: Stomatologists who crossed Venezuelan borders with nerves swollen by fear and desolation; nurses, orthopedists, recent young graduates that after landing in Namibia or Guatemala enrolled in semi-illegal expeditions to the United States, knowing that Cuba where they were born and where they left their families and wives will, in the future, continue to feed their memories and melancholy.

While the owners of their Island live, they cannot enter.

Looking behind the curtain of smoke that this case creates, I think that more than pain or insensitivity, the history of some doctors that suddenly lost all autonomy and mutated into state property, should cause fright, some sleepless nights, in those Cubans who still can travel without 5 years of official purgatory.

Raise your hands those who think you know, with total confidence, what will be the next economic strategy implemented by the establishment to save, this time for certain, the Nation from total ruin. Raise your hands whoever is sure that soon the members of a new army whose liberty will be cut off by official decree won’t include chess players, accountants or amateur singers.

Translated by Dodi 2.0 and others