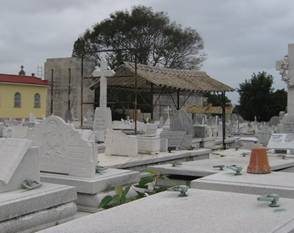 The Havana Cemetery is once again in the news and a reason for concern among the city’s inhabitants. Its plight is an ongoing Via Crucis. Ever since church officials were relieved of responsibility and administrative duties were taken over by the government (perhaps with the intention of turning it into a Marxist-Leninist cemetery), it has suffered from neglect, robbery of its religious artifacts and works of art, the sale of its tombs and crypts, the smashing of skulls, the theft of bones and craniums, the elimination of its faucets and woodlands, and other indignities that have been widely denounced.

No effective measures have been taken to solve the problem, such as replacing the current staff, which has been implicated in these issues, with a new administration. Now, perhaps through self-initiative or because of “orders from the top,” it has been decided that all zinc, asbestos tile and wooden roofs over graves and crypts are to be replaced with sheet metal. An exception is being made for ceramic tile roofs. When questioned, employees said the material was being given to people who needed it to repair their dilapidated homes.

At first glance this measure would seem reasonable to some. Why should the dead have roofs when many of the living do not? But this is not the issue. Besides showing a lack of respect for the deceased (when will they be left to rest in peace?), it is a violation of citizens’ property rights in regard to their graves and crypts, and a crude form of plunder.

Perhaps someone, motivated by the series of reforms being carried out to legalize the illegalities being committed, has decided to apply them to the cemetery and legalize the on-going robbery of roofs, thus solving the problem. According to this logic, if one eliminates the object being robbed, there is no robbery. The danger is that this practice could extend to ironwork and marble to the point that the cemetery simply disappears.

The “reformed” vandalism that is currently being carried out is an indication of the current level of human and moral decline. Even in the mythical Macondo* the dead were respected!

*Translator’s note: Macondo is the fictional town where Gabriel García Márquez set his novel, One Hundred Years of Solitude.