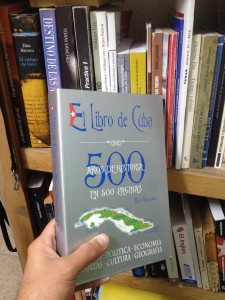 Eliecer Avila, 26 February 2015 — After having “conversations” like these, I always ask myself is it is worth the trouble to publish an account of them or not. I do not like even giving these people the impression that I have blabbed about everything. But I also believe not publishing such accounts only hurts me. They have cameras everywhere and have demonstrated they have no scruples. They can release a doctored video recordings and use the information to destroy someone’s life

Upon entering the airport yesterday, I was approached by an immigration official. After taking my passport, he led me to a small office for “routine questioning.” Since I am already familiar with these ploys, it did not surprise me to find Lieutenant Colonel “Yanes” and “Marquitos” there in the room. The latter goes by a different name when he is with other people. He was the young man who “looked after” us some time back. It was he who put me and Reinaldo into the patrol car on the day of Tania Bruguera’s performance.

After my phone was taken away, the “chat” began. Though it was extensive, I am highlighting here only certain essential passages that provide some insight into the mindset of these people. Also included are some of my responses and other reflections on their points of view.

State Security (SE): Get this straight: The Revolution is not going to fall apart because you or some other little dimwit want to see it happen. You are a nobody!

I ask myself this: If I am so insignificant and pose no threat, why do they focus this attention on me? Wouldn’t it be better to use the gasoline they’re wasting, the time, the salaries, the clothing and all the other resources to fix the hospitals, build buildings or buy internet antennas?

SE: You are quite mistaken if you believe that we are afraid of the internet. The thing is we provide it to doctors, professors and Revolutionaries. We are not going to provide it to people like you or Yoani Sanchez. And don’t get the crazy idea that the Americans are going to subvert us with the internet. We are going to have a secure internet like Russia or China. You know full well that we have thousands of technicians and cyber experts to deal with that.

It seems surreal to me that someone, especially a young person, would tell me that the model for information access that he wants for Cubans, for his own people, is to be found in Russia or China. On the other hand, it comes as no surprise to me that, given this mentality, the Cuban economy is in such ruins. Here is one of thousands of young professionals in the prime of their working lives trying to put the brakes on the nation’s development. I would give anything to have this conversation in public! I would love to know what Calviño thinks about this. What intellectuals, humorists, workers, artists, students and even the police and military officials think. I invite them to discuss this subject publicly but their response is to change the subject.

SE: So, tell me. How did your trip go? With whom did you meet? What did you do?

It went very well. I will share the details with my family, with my friends. I don’t see why I should share them with you.

SE: O.K. We see you favor diplomatic relations with the U.S., but fundamentally your position is the same as that of other Counter-Revolutionaries. You see this change as an opportunity to import that “perfect democracy” that you like so much, like what they have in the U.S. That’s the conclusion our analysts came to after watching your interview on CNN for example.

I am tempted to say a lot of things but realize that doing so would be pointless, so I say nothing.

SE: Look, Eliecer, since it is my duty to advise you, I suggest you don’t get involved in all these initiatives that are sprouting up, in the house of your friend Yoani, or in the the events for the summit. Remember the instructor (investigator) who took care of you in Regla on the 30th? Well, don’t be surprised if there is a knock on your door and you are arrested for breaking the law, what with all the things you peope have been up to. We have laws here, just like in the U.S., and you didn’t break any laws there. Right?

Expressing oneself is not a crime in any normal country in the world. I will keep saying what I think in Cuba, in Greenland, on Mars. Wherever I am invited to engage in serious conversation, I will be there, whether it be Yoani’s house or the Council of State!

When they finally let me go, they were waiting for me at Customs on the other side. They took me to another small room and conducted a thorough inspection of my luggage. They finally saw I was clean and had almost no luggage. Their focus was on analyzing a book which René Hernández Arencibia had dedicated to me: The Book of Cuba; 500 Years of History. After the young customs agents and their boss had a good long look through it, they arrived at an encouraging conclusion: “Wow, it looks like it covers everything.” And then they let me go.

Still fresh in my mind is the loss of thirty-six books which were confiscated for being “of inadequate literary value.” Clearly, the literary training of Cuban customs officials must be a serious matter. I doubt the world’s great men of letters could arive at such a conclusion so readily.

I finally left the airport and went home. Then begins the “yoga” to refresh and detoxify with the little left to us in Cuba to enjoy: family, friends… and faith in the future, which refuses to be broken.

Footnote: This post should have been published a day earlier but was a delayed due to communication difficulties arising in Cuba.