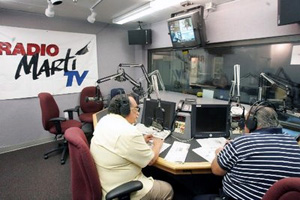 Havana, Cuba. Listening to Radio Martí* in the just concluded week has improved. Listeners on the island have witnessed this in different provinces as well as in the capital Havana.

Oscar Benitez who lives in the town of Santo Domingo in the province of Villa Cara commented about it, “I do not know what’s going on but, now I can hear radio Pepe better than ever” … while residents of the municipalities of Quemado de Guines and Sagua la Grande agree with Oscar’s opinion that they now have the option of listening to Radio Martí also through Radio Caracol at night.

In recent years, Cubans have been complaining of poor reception for Radio Marti on the island a station preferred by Cubans for its accuracy and timeliness of the news. Reception has improved in recent weeks.

A resident of the Havana municipality of Playa commented in a bodega, “What I like to hear most are the changes in their programming, these days that have been talking about a different José Martí* from the one we know; what makes me furious is that we still can’t watch the TV, but times change,” the old man concluded.

*Translator’s note: Radio Marti is a U.S. government program to broadcast programming to the Island’s residents in Spanish. Today is the birthday of Jose Marti, from whom the station takes its name.