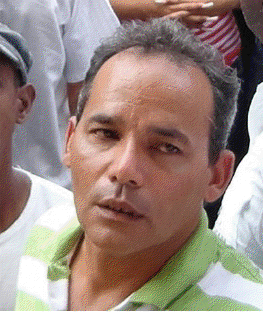 November 8 marked a year since our peaceful demonstration in front of the Acosta Police Station (Unit 1), demanding the release of Antonio Rodiles, Yaremis Flores and Laritza Diversent.

After the corresponding beating and arrest, while they led us to our respective cells, distributing us around the city (divide and conquer?), the henchman Camilo, a State Security official, assured me that I would be sentenced to five years in prison.

Eugenio Leal, who was with me in the patrol car, heard him from inside the car, and everything that happened a month earlier at the Provincial Court determined this same sentence, of course, everything would have been understandable if we restrict ourselves to saying that the trial was in Courtroom 1 at State Security at their special site at Carmen and Juan Delgado.

I assured the official Camilo that from my part I wasn’t scared, but when the moment came to pay for his abuses and atrocities, I hopes he would behave with dignity, as I did. Then he smiled with characteristic cynicism. “When I’m touched, you will already have been touched,” he said, brimming with sarcasm.

While the wait for my imprisonment wore on, I had the opportunity to leave the country and avoid the agony, but my need is to continue, and I preferred to be imprisoned here rather than free in Miami.

Shortly I will have served nine months in prison, I corroborate my decision, and I will continue to try to be helpful in prisons where I have been locked up. Never before had I felt that I could help safeguard the integrity of persons, in this case the prisoners who are in the barracks with me, I have maintained the level of denouncing the injustices the guards have been committing.

What the official Camilo did not know is that with his response he accepted that the dictatorship will pay for its excesses, except that, like the human beasts that they are, they are unable to act with decency, that’s impossible for them given the job they have to perform. Meanwhile, they are going to live as best they can, they receive gifts and awards from the regime to maintain the level of immorality, which also they enjoy committing, but we all know that justice will come, then we will look at those criminal eyes covered in tears, justifying the orders that they fulfilled, and next to them they will see those who pushed them to commit their fascist acts.

For now they continue to laugh but, ultimately and unfailingly, justice will be done.