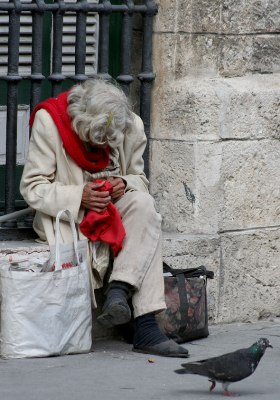 Last Thursday April 28, as part of the lecture series that regularly takes place in the Fray Bartolome de las Casas Room, Mr. Roberto Veiga, editor of the journal Lay Space, took as his topic “Present Urgencies, Future Imperatives of Cuba,” which was presided over by an emotional and illustrated introduction from Brother Manuel Uña, rector of the Dominican Center. Veiga began expounding on the theoretical assumptions of his thesis, structured around three core concepts: equality, freedom and fraternity.

Based on the beliefs of Father Felix Varela, he defined equality as the right that every person possesses, to have his merits and perfections appreciated. After that he delimited three kinds of equalities: natural, social and legal. The first one indicates the identity of the human being; the second one equal participation in social goods and the third refers to the assignment of rights and the imposition of rewards and penalties, that is, equality before the law. From this conceptual framework he failed to mention some vital aspects, from which I selected 12:

1. Racial equality, guaranteed by law but transgressed in daily basis. Regarding this matter he admitted the existence of a debate and established the need to facilitate it ,widen it and incorporate cultural and educational policies in order to solve it.

2. About the economic model he stated that the material and human precariousness we suffer damage freedom, equality and fraternity. Therefore, the need for its readjustment, for the decisive role of work to resolve full employment and make society more equal, fraternal and free; this represents a difficult task because it is impossible to be profitable with the current over employment.

3. About economic decentralization, he warned that it may increase the unemployment rate, generating more poverty and weakness. Therefore it is necessary to decentralize, at the same time creating means to ease the pain and to create jobs as soon as possible. Also, he considered that wide foreign and investment should be a priority every initiative coming from the citizens should be insitutionalized; for that purpose it will be necessary to establish fraternity as a social culture.

4. He considered that education should be free and obligatory up to the 9th grade, which, of course, led to the valid opinion of allowing this education to have a private variant. He also said that too much of a differentiation in basic education could originate an educational unbalance and lack of integration of the new generations. Therefore, the public school system should incorporate some academic freedom, pedagogical plurality and the possibility of learning religion and the most broad scope of philosophical, sociological, legal, economic and political knowledge.

5.He stated that to enjoy the equalities required by the human implies access to greater shares of freedom. But the current Fundamental Law limits the freedoms to be exercised in conformity to the goals of socialism and as a logical result the exercise of freedom is conditioned to this boundary. Mr. Veiga prefers a society that guarantees the broadest political and ideological spectrum, but assured that he would feel satisfied if we deploy all these ideals and means in a participatory and consensual manner.

6. He spoke of the crucial issue of political freedom, which limits citizens’ real capacity to act, especially when the citizen diverges from the official ideology. Addressing the question of how to guarantee the political freedom under such conditions, he considered that the best solution is to open the possibility to allow other political associations.

7. About the debate on the documents of the Sixth Congress of the PCC, said the ongoing dialogue process, mainly on economic issues, signals the existence of attitudes that can derail the path of achieving a consensus. On one side there are groups opposed to the government, with an enormous incapacity to recognize its legitimacy and to establish a dialogue with it. On the other side an official class that, in many cases, is afraid of any change and tries to strangle any debate. It is sad because we are living at the right time to jointly contribute to the search for a Cuba where we all can fit together.

8. In this regard, he stressed that a generalized agreement over the principles on which Cuban society should be based and the means to realize it, designed in a way shared by the population, could provide the national enthusiasm to devote to sculpting a community effort based on fraternity and diversity. At this point he reminded us that the Cuban bishops, in the Pastoral letter, Love Endures All Things, proposed a dialogue between Cubans, frank, friendly and free, not to get even and establish responsibilities, nor to silence the adversary and vindicate the past, but let the other to have a vast discussion; a dialogue not so much to find out the whys, but the what fors, because all the whys always discover a blame and all the what fors bring by themselves a hope. A consensus that could lead us also towards an important and necessary constitutional reform.

9. He stated the importance of the family for the formation of people and nations, its condition as the fundamental cell of the society, requires it to be guaranteed all the rights it demands and intensive support so that a responsible development can be achieved.

10. When referring to the political arena, which traditionally possesses a substantial influence in the social and institutional conduct of the country, he inferred the need for an institutional public network through which every citizen could fraternally contribute to achieve his or her freedom and equality and that of others, which he named the democracy of consensus.

11. He referred to the administration of the court system, which must gain relevance in comparison to the all other public institutions and offer a highly professional treatment, given its character as a guarantor of justice. Regarding the National Assembly, he stated that all candidates should be elected as a result of an authentic process in the heart of social organizations which represent different sectors of the population, and act as a catalyst between the society and the state. About this he said, “What I can say is that in the future this should imply that the people can directly elect the top figure in the government, as well as revoke his office, which would result in a widening of freedom and equality.”

12. To close, he stated that the current president , Raul Castro, has the historic mission of facilitate this process, but also he comprehends, he said, that there is a little time left for such a huge task.

At the end of his exposition, clear and precise, Mr. Veiga was rewarded by his audience with one of the most prolonged ovations in the history of that academic auditorium.