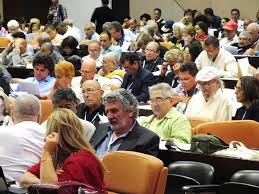 Having no choice, the press has presented a ton of coverage of the VIII Congress of the Cuban Writers and Artists Union (UNEAC), which concluded with the presence of Army General Raul Castro, and  which affirmed during the different discussions that the culture is committed to the Revolutionary forces to implement in every sector of the country the “new Cuban model.”

And, as “a picture is worth a thousand words,” taking a look at the published photos, we see the main auditorium of the Palace of Conventions with an audience only comparable to an overbooked hotel during Holy Week; the faces of those present reflect boredom, absence and “I don’t care.”

The curious note of the Congress was that, like someone coming out of the closet. the General defined himself as “the absolute enemy of unanimity.” So he leaves us to wonder if he understood what he said, or said it without thinking?