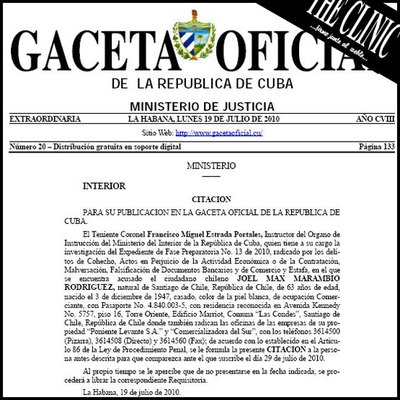 A week ago Max Marambio, alias El Guatón – The Fatso – was due to come to this Island, appear before a court, explain certain matters. The owner of the joint-venture company Río Zaza, however, has preferred the protection of his Chilean homeland, as he is an expert – like no one else – in the unpredictable results of putting oneself in the hands of Cuban justice. Accused of bribery, embezzlement, forgery of bank documents and fraud, he who was once the favored protégé of the Maximum Leader just received – instead of pats on the back – a warrant for his arrest.

I miss Marambio even without having known him, because with his departure the number of families on this Island who can drink a glass of milk whenever they like has been greatly reduced. The informal market that supplied itself from his warehouses collapsed as soon as he left, and the underground networks that diverted his products either dried up or doubled their prices. When the lieutenant colonel turned manager escaped to Santiago de Chile, we realized the role that this man – forged at the right hand of power – played in what we put on our tables. He didn’t do it for altruism, clearly, but at least he diversified the boring local production and managed to make a tetrapack something that was not a collector’s item.

Marambio’s fortune was amassed where Cubans cannot invest a single centavo: in those joint venture companies opened to those with foreign passports but not to those with national ones. His personal history was a preview of what we will see, a prediction of how ranking military will transform themselves – dressed in suits and ties – into ideology-free entrepreneurs. Despite his agility with yesterday’s weapons – a Kalashnikov, slogans, Marxist dogma – we remember him for other strategies: bank accounts, trading favors, investments. His former comrades in the struggle will show him no clemency when judging him in court, because the paunchy Chilean ended up turning himself into a commercial competitor, not to mention that he knows too many stories – secret ones – about them.