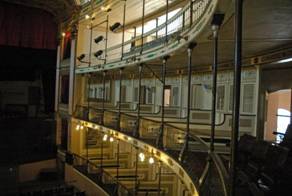 The Eighth Congress of the Union of Cuban Writers and Artists (UNEAC) recently ended, yielding very poor results, which was not unexpected to those of us who have been following it before the run-up and during the proceedings.

It began with a doctrinaire address by its president, who stated that “UNEAC is the Moncada Barracks of culture” and “from its beginnings UNEAC has done nothing but serve the Revolution.” This came as a surprise to no one, especially given the presence at the event of important figures from the Communist party and the government, which guaranteed there would be no deviations.

Discussions among the more than three hundred delegates from all over the country were led by various commissions—culture and media, art, the market and cultural industries, urban affairs and architecture, national patrimony and sculpture, regulation and litigation—were restricted to rehashing proposals presented at previous congresses, most of which have never been put into practice.

We are inundated with rhetoric about issues related to creativity, the analysis of contemporary aesthetic trends, the need to rethink radio, television and film while taking into account the emerging needs and expectations of the population, to confront all forms of corruption, indiscipline, waste, disorder and vulgarity, the need for more effective mechanisms for commercializing art, the need to define and implement policies for the built environment, the need to chart a policy for the city and for architecture through national development programs and the proposed changes in the legal statutes. It’s really hard to separate the wheat from all the chaff.

Once again there were the “genetic censors,” seeking to solve problems by creating committees to review and approve, a ludicrous approach in the current context. It is evidence of generational stagnation and the influence of the exalted sayings of the National Orator—ever-present if not physically present—who is remembered as our “greatest intellectual.”

It was pure theater in which every one of the participants knew by heart the lines he or she was supposed to say.