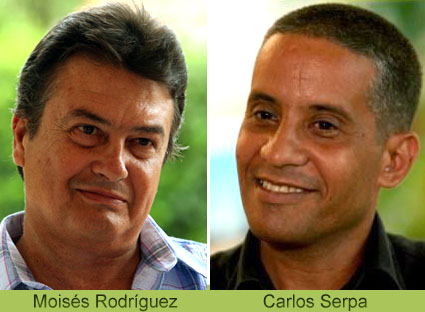 It is, without a doubt, the news-of-the-day for Cuba. It has been news on the Island and off the Island.

The new revelation of the identities of Moises Rodriguez and Carlos Serpa Maceira, two State Security agents whom the Cuban government, until Saturday 26 February, infiltrated into opposition groups, is just another case, another grain of sand on the endless beach of similar stories that comprise the daily reality of my country.

Nevertheless, it shakes the ideas, thoughts, reactions, of all those who aren’t already completely undone by this fated and incandescent little island.

I believe that a comprehensive assessment of the material titled The Pawns of the Empire, aired in prime time on Cuban television on February 26, must go beyond skin-deep and quick analysis, so I have broken it into five thematic segments essential to my understanding, for the sake of a deeper and more effective dissection.

1. Who is Telling Us the Story?

One of the primary aspects to fairly weigh the testimony of these two moles, to locate their words on one side or the other of our consciousness, is to clearly define who they were, from the beginning, these people who today are enjoying their fifteen minutes of fame.

We cannot fall into the psychological trap of associating them with the opposition, and then credit them for talking about it with great ownership. We have to remember something: when we hear their testimonies we are not seeing people who were once members of these movements, who distanced themselves and broke with the opposition because their moral precepts went against them. 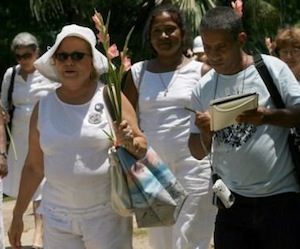 That’s not the case. They were, at all times, agents who, from the very beginning, were enemies of those opponents, men who had one very clear agenda: take notes, look for weaknesses, deficiencies and imperfections as in any human endeavor, whatever they could find.

But it is vital to understand their statements not as if they formed these negative views from life experience. Moises Rodriguez (the “agent Vladimir”) and Carlos Serpa Maceira (the “agent Emilio”) knew what they would find among the dissidents, what they wanted to find, and nothing human or divine could prevent that from happening.

According to Moisés Rodríguez, in all his years of links to the counterrevolution he had the pleasure of knowing practically all the dissidents. And he says, “I didn’t know a single one who was truly sincere.” He describes all of them as corrupt, servile, and a long list of other denigrating qualities.

And on this point, the thinking being, the rational man, must stop and look at that statement with suspicion. Why? Because absolutes are very good for campaigns, for thought manipulation, but are never accurate in an assessment.

Equally, I can’t say that all the defenders of the Cuban Revolution are assassins, censors, tyrants, among other things, because I know excellent people, incapable of doing harm to their peers, who approve the process, and the same reasoning is applicable to those who dissent. So it is when one wants to evaluate fairly, without murky intentions, or when one doesn’t have a pre-established agenda. 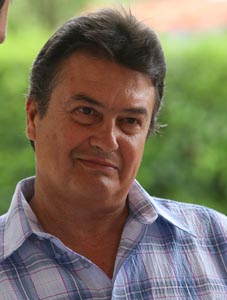 Mr. Moisés didn’t know even one, one dignified example, at least one pearl among so many swine? Then one of two things: either the gentleman didn’t, in fact, know all the dissidents, and he specialized — in some inconceivable way — in contacting the most perverse, or, more likely still: he has no interest in offering a true picture of these people.

His intention is to demonize, and for this it’s very simple — and easily detected by us — to generalize without any possible discrimination.

What happens is that, fortunately, we have not all been lobotomized by the system. And we know this art is denied by some who think with their own heads, a healthy exercise that allows us, for example, to admit that it’s true that within the Cuban dissidence there are many despicable people, but (and this is the $64,000 question): How does one accurately assess the role of the opposition given that it fights on massively unequal ground?

What would the Cuban opposition be without the constant infiltration of those agents, without the repression and persecution; if it were allowed to freely organize, speak in the same media that slanders it, or in its own media, and undertake political work legally as happens in most of the countries in the world?

I have my answer: It would be an opposition made up not only of the people with the biggest balls — women included — but of people with the greatest intellect. And I prefer, not intending to harm any friends, the endless number of artists, engineers, accountants, doctors, lawyers, journalists, who would give strength to a more solid and respectable opposition, if dissent in Cuba today was not the purview of lunatics, suicides and martyrs.

3. A Political Endorsement as a Passage to Freedom

One of the denunciations most dangerous to their cause, most contradictory, made by agents Emilio and Vladimir, is this: “Among many there was a desire to accumulate a record as someone politically persecuted, to be able to leave the country.” It also corroborates another of the interviewees: Captain Mariana (unnamed in the documentary).

This, all things considered, subtracts from the brilliance and dignity of the work of the opposition. Is the accusation a lie? It is not. I can testify to this: for too many supposed opponents, defenders of Human Rights in Cuba I have known, their objective is clearly not the democratization of their country, but the ability to flee from it by any means possible. In order to obtain a visa for the United States, they would challenge head-on the reproduction of storks or the Law of Gravity.

In fact, one of the strong points of this documentary in its effort to discredit, is the recording — a flagrant violation of privacy, common in those who can — of Marta Beatriz Roque speaking with Rene Gomez Manzano saying that, because in Pinar del Rio a certain assembly would not be held, then no one would be able to go from there to Miami. And as keeping my mouth shut about what I think is not a cultivated habit for me, I will say that there are few declarations by dissident figures that I find more abhorrent and deplorable than this.

If it’s about a genuine opponent, if Mrs. Marta Beatriz is not “burned” in the future as agent “Juanita,” she does little favor to the beautiful cause of Cuban freedom with her foolish speech and her unpresentable way of defending Cuba.

Nevertheless, let us turn the coin and look at the other side: What kind of country is this where people need to fabricate for themselves a dissident history — sometimes without even having a vocation for it — in order to leave? Who denounces such facts? Their very own agents don’t realize the ridiculous reality of Cuba, where Cubans go to such extremes to escape a prison-like island.

An ironic conclusion for the Cuban oppressors: eliminate the impossibility of traveling freely from Cuba, and surely they will reduce the ranks of the internal enemy.

One of the passages which generate the most interest, controversy, or entertainment, according to how you look at it, is the false denunciation that the infiltrated Carlos Serpa Maceira makes through Radio Marti, exposing the loose verification of information by that Miami-based radio station.

Now, I admit that carrying out serious and intelligent journalism consists of much more than reporting clandestine information, which is unable to be confirmed. But it’s worth it to look at other angles of the show put on by “Agent Emilio” which was aired before surreptitious cameras. 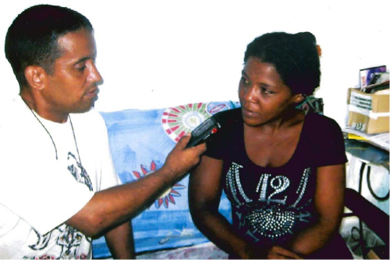 First: it’s impossible, in the literal sense, that any radio station or media outlet in any part of the world can immediately confirm any denunciations coming from our country. The fact that Cuba has squashed all possibilities of free-flowing information, the only options left are to either believe or not believe in those who give their testimonies.

In this particular case, it wasn’t a case of a random source giving a report: It was someone who had an 8-year record reporting about continuous and real arrests, real aggressions against the Ladies in White. Believing in him was not something stupid or idiotic.

The underlying question behind this sweet 40 minute audiovisual display is, to my understanding, almost obligatory in the effort to comprehend what has just been shown to us. And it formulates like this:

What is the real objective behind Pawns of the Empire?

To demonstrate the existing ties between Cuban opposition organizations and important political names and structures based in the United States and Europe? To demonstrate to the world, and to Cubans, that the most well-known dissidents within the island, whether it is the Ladies in White, Elizardo Sanchez, or Marta Beatriz Roque, receive financial assistance from the outside? At this point, I think it makes more sense to make a documentary depicting, for example, that we humans are mortal, as opposed to this supposed premise.

Why? Well, because once the Cuban government adjusted its mechanism to only allow official politicians to take part in activism, it condemned those who dared go against them to death by hunger.

So then, what does an opposition leader live off of in Cuba? Who offers them work, and who will contract with them? Even more: politics, just like any other human activity, needs money in order to be carried out. How do you exercise politics in Cuba when absolutely all the opportunities have been closed down so that financing would be considered illegal?

Then, these people with liberation vocations are only left with two options: 1) Acceptance, first to survive and later to engage in politics, with financing that can only come from the outside, and very well camouflaged, or 2) To give up individual freedom and succumb to the imposed laws.

Again, the initial question: What is the objective of Pawns of the Empire?

According to my judgment, it’s as clear as the water: to isolate the opposition from Cuban society, to demonize them publicly, without giving them a chance to respond. And even more, and overall to remind Cubans that the State Security apparatus is one of the ones which will never have any layoffs, and also to remind the people that they better not think of themselves as free to express themselves and free to dissent. Big Brother will always be paying close attention to record phone calls, to film the insides of their houses, to fabricate agents. None of this is impeded by the legal system in the name of sacred individuality.