Site manager’s note: The information about the extensive repression leading up to the Pope’s visit is coming to us through Twitter, emails, Hablalo sin miedo (Speak without fear) and other routes, other than blog posts. Raul Garcia Jr., over at Pieces of the Island, has prepared an excellent summary of the most recent reports. Keep on eye on Raul’s site for updates. Yoani’s Twitter feed translated into English, here, is also a good source.

Human Rights Watch has a report here.
FROM PEDAZOS DE LA ISLA / PIECES OF THE ISLAND 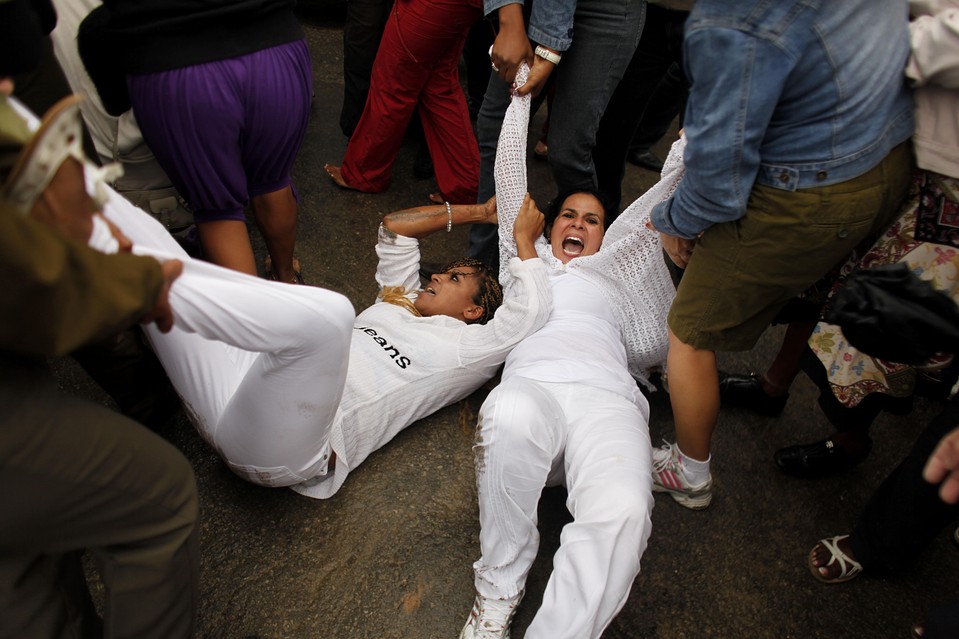 Caridad Caballero Batista, an independent journalist and Lady in White, reported from Holguin on Friday, March 23rd, that she and her family had been taken off the list of Cubans who would be allowed to travel to the Mass to be celebrated by Pope Bendict XVI on Monday, March 28 at 5:30 pm. The activist went to the pastor of her local church and asked him about this. The Father told Caballero that he approached a Communist official from the Department of Religious Affairs who told him they had nothing to do with that, but State Security made the case to to omit her. Caballero, her son Eric and her husband Esteban, however, have said they will try to go to the Mass in Santiago de Cuba anyway. The activist denounced the fact that all of the homes of all dissidents in Holguin remain under strict surveillance of the Cuban political police.
Marta Rondon Diaz, coordinator of the Eastern Democratic Alliance and a Lady in White, reported that on the night of Thursday March 22nd she was able to reach the home of her elderly mother in the neighborhood of Buenaventura in the province of Holguin, but amid much vigilance and threats. Once inside the house, Rondon said that a number of officials from the political police and State Security had surrounded the house and threatened that she could not travel to the Pope’s Mass in Santiago de Cuba either. The opponent affirmed that “the Cuban regime can not stop me from going to church because I am a practicing Catholic, it is my faith and my house is not a dungeon. I will leave the house.” Meanwhile, on Friday afternoon, Díaz Rondón’s husband, Juan Oriol Verdesia was violently arrested in their hometown of Banes and his whereabouts are unknown.
Luis Felipe Rojas, blogger and independent journalist was also reported arrested in his small town of San German. Many opponents have tried to contact his wife, Exilda Arjona, but their phone line appears to be blocked by the massive censorship tactic across the island, as are the cell phones of countless activists including Yoani Sánchez, José Daniel Ferrer García and Oscar Elias Biscet.
Sara Marta Fonseca, Lady in White and human rights activist, also has had her cell phone blocked for several days. On Friday afternoon she was also arrested with her husband, Julio Leon Fonseca, in the Cuban capital.
Rolando Rodriguez Lobaina, national coordinator of the Eastern Democratic Alliance, who was deported this week from  Havana to his home in Guantanamo, detailed via Twitter that arrested by force, on March 24, were opponents Isael Poveda Silva – in Guantanamo — and in Baracoa: Francisco Manzanet, Roberto Pelegrin and Roneidi Salas. A Cuban military officer told Silva that they were going to “round up all the opponents before the papal visit.”
Jorge Luis Garcia ‘Antunez’, the national coordinator of the National Civic Resistance Front Orlando Zapata Tamayo, also used his Twitter account to denounce the arrests of Misael Valdes and Elicardo Freire, among other dissidents of that umbrella organization.
Jose Daniel Ferrer, a former political prisoner and current coordinator of the Patriotic Union of Cuba (UNPACU), related other violent arrests on the morning of Saturday the 24th at Contramaestre. Arrested were Jorge Cervantes and William Cobas, among other UNPACU activists. Cervantes was reported “wounded” and his arrest happened when he opened the door of his house to receive Cobas. Instead, many officers from the political police burst into this home and violently beat the dissident, taking him prisoner to an unknown location.

Ferrer Garcia also reported the arrested of Lady in White Liumilla Rodriguez in Palma Soriano.  Another 8 Ladies in White were arrested in Santiago de Cuba, according to the leader of the female group, Berta Soler.  Soler added that she was also under vigilance and threats in Havana.

From the municipality of Santa Cruz del Sur, in central Cuba, the dissident Yoan David Gonzalez told ‘Hablalo sin Miedo’ that a large operation of police guards, State Security agents, and other “government watchdogs” are circling the home of dissidents in the area, especially his.

The Cuban Democratic Directorate informed that the dissident couple, Franklin Peregrino del Toro and Berta Guerrero (Lady in White) in Cacocum, Holguin were violently harassed when they stepped to the door of their home.  ”They are currently surrounded,” read the Tweet posted by the CDD.

Meanwhile, on the morning of Saturday the 24th, activist Raul Risco Perez sent a Twitter message from Pinar del Rio (Western Cuba), explaining that a number of Ladies in White were surrounded and being impeded from reaching church.

This has just been a partial summary of the violence which has been unleashed all throughout Cuba only hours before the visit of Pope Benedict XVI.  We are alerting the world that all members of Cuba’s internal Resistance run serious dangers, whether they be public activists, independent journalists, independent librarians, bloggers, or religious figures.  A number of telephone lines belonging to dissidents continue to be blocked by the communist regime of the island and it has become increasingly difficult to communicate with those who struggle from the inside of the country.  For Saturday night at 8 PM, members of the Orlando Zapata Tamayo National Front have called on a national “pots and pans” demonstration to protest against the increasing violence and as a message to Pope Benedict XVI and to the world that in Cuba human rights are being violated and that there are activists who are fighting for those rights and suffering the consequences.

Human Rights Watch has just published a detailed report about these violations and others  here.

For more information I suggest following these Twitter accounts: