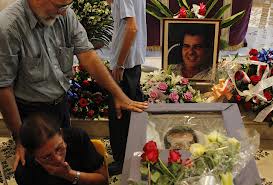 Oswaldo Payá has died and left us, this man who with his “Varela Project” taught my generation and Cuba that freedom is possible. We were very young then and our idea was to shout liberty through literary works, which, from our naivete, we thought was the most direct path to democracy, and that this was the only possible weapon with which to fight.

We have just left the parish where we were offering a last farewell to the body that accompanied him — because his spirit, as we all know, has remained with the Cuban people: his great love. We began to shout “Payá vive!” Payá lives. Our hands hurt from clapping while his coffin was carried from the entrance to the altar.

The priest had to intervene to stop this show of grief and admiration that seemed, and is, interminable. Finally he was able to start the ceremony.

As happens, the image that came to my mind was that of the Father of the Nation: Carlos Manuel de Céspedes, who suffered his dying moments similarly, the final minutes in San Lorenzo and that sad and solitary road on the outskirts of Bayamo. And to make matters worse, the mysterious vagaries of the convergence not only in their ideals but in geographic space.

His wife, devastated, went to the microphone and asked for silence as they wished to pray. Then we started to pass by the coffin. One of the first who reached it was Monseñor Carlos Manuel de Céspedes. When I was able to approach the coffin I could see, in Payá’s face, the blows he suffered in the fatal fall, and also the permanent light shining in his image that will accompany him always.

At 8:00 pm we participated in the funeral. Tomorrow* at 8:00 in the morning Cardinal Jaime Ortega will offer mass. Then, it’s said, one of the two survivors will give a press conference to describe what happened. Then we will know the truth.Until then we only have suspicions and conjectures.

And anger which, hopefully, we know how to use to our advantage.

*Translator’s note: This article was just posted, but the “tomorrow” that Ángel refers to is today.