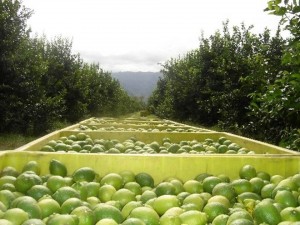 Not even I understand how much those nearly eight months — from 30 November 1993 to 28 July 1994 — affected the rest of my life. I was used as cheap and reliable labor, exposed to hard labor in the citrus harvest, to the substantial economic benefit of the Cuban regime and the Grupo B.M. y Waknine & Berezovsky Co. Ltd. Over the years now I hve come to understand that it was a chapter God had for me. The experiences I went through had to do with things far beyond what I imagine, given all that I have been and done since then.

My friend Omar Lopez Montenegro whom I met last June on my trip to Poland excitedly tells his experience at the famous Pre-University of de la Víbora, a site which has also been immortalized thanks to another of its graduates, the writer Leonardo Padura Fuentes, who turned this mythical place into the origin of the backstory of his character detective Mario Conde.

The joint non-violent resistence of Omar and other friends prevented some gatekeepers from cutting their long hair during a period of mobilization in the field. I lived something similar in Boom 400 of the EJT (Ejercito de Trabajo Juvenil, or the Youth Labor Army) and above all the vivid outrages will stay with me forever.

After walking for three months among the concentration camps adjacent to the towns of San Jose Torriente and San José de Marcos, they made us return to that of Socorro en Pedro Betancourt. Supposedly from this Boom 400, which was our original camp, the suppliies assigned to us should have arrived, but we received nothing during those three months during which we wandered on some supposed mission whose high work goals were never met.

During those three months we didn’t even get a pass to go to our homes. We felt sorry for ourselves. Our clothes were dirty and ragged as could be. Most of us were walking barefoot, a few with broken boots. One of the generals named Acebedos came by for inspections and called us “the shirtless”, and a relaxed captain in the camp next to Torrientes, seemingly moved by compassion, told us — pointing at his massive gut: “Don’t be discouraged boys, I lost this belly in the army”.

On returning to our original camp, we held out the hope that things might change, but on arrival, a new unit chief met us: a Navy captain whose punishment was being sent to the EJT. And I became aware of another characterisic of this invincible army: it was the punishment site for MININT, Armed Forces, and even Navy officers.

For us, the officer’s reception was to inform us that we’d just arrived at Boom 400, and we had to earn all we asked for. An additional answer to our worries was the delivery of immense Chinese machetes, and after a miserable lunch, he made us go to some place infested with the invasive marabú weed that we had to pull up and prepare for the planting of citrus.

That was more than a humiliation. Supposedly, in those conditions we didn’t cut even one marabú, our patience having completely dripped away, so even better we organized and so it was like that night in May 1994 when, in protest, the complete squad deserted and we agreed that nobody would return for at least a week. The silent exit from the camp and the trip, one by one, through the orange orchards towards the national highway where in a matter of minutes we undertook a course towards Las Villas, were the most glorious moments of those eight months of abuse.

On our return, at least those who returned — some never did — we were subject to trial in the camp’s ampitheater, seeking an answer: “Who had been the leader?” The end of the trial consisted in the delivery of the supplies they’d deprived us of for the last eight months, our manner of nonviolent protest showed the vulnerability of those who thought they had power and made us discover that power was really in our hands.

The en masse desertion of an EJT squad had made the news all over the island and uncovered corruption in high places. Although I was liberated, that unforgettable July 28, 1994, I can’t deny that since then, orange juice runs through my veins.