Members of the Republican Party of Cuba (PRC) and the November 30 Movement, remain entrenched from the afternoon of Tuesday 13, at the Shrine of Our Lady of Charity, located in the Havana municipality of Centro Habana.

The opponents demand an end to repression and violations of human rights. In addition to presenting a set of demands to the Cuban authorities, looking to the upcoming visit of Pope Benedict XVI they demand the following: 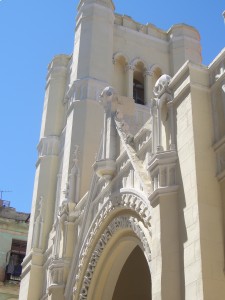 The Chancellor of the Church, Monsignor Jose Ramon Suarez Polcari and the pastor of the Church of Our Lady of Charity, priest Roberto Betancourt, met with the opposition to ask them to leave the church, but they refused.

Vladimir Calderon said by telephone that the attitude of the church hierarchy was threatening:

“They told us that the protest was improper and vindictive, that the Church was not a shelter and they would be forced to denounce us to the police.”

In the evening, State Security cut the phone connection and maintain a cordon around the sanctuary, a police crackdown on the protesters is feared.