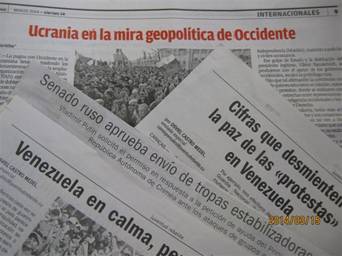 During these last few weeks we have “enjoyed” to the point of boredom the Russian version of events in Ukraine and in Crimea, and the Chavez version of the situation in Venezuela. In the first case, we have heard and read what has been said by the Russian President, Prime Minister and Ministers of Foreign Affairs and Defense, and even by the deposed Ukrainian President who has been granted asylum in Russia, but we have heard absolutely nothing of what the new authorities of that country think.

In the second case, the same has happened, i.e. we have heard from the President and his Minister of Foreign Affairs, but nothing from the opponents or students participating in protests and violence. In both cases, as is now usual, opponents have been labeled fascists (which has become fashionable), marginal extremists, terrorists and even traitors to their respective countries.

I do not hold our press solely responsible for this misinformation and distorted information, because it only obediently does as ordered by the authorities who for years have unconditionally supported anything that goes against the United States and the European Union, no matter where it comes from or who promotes it.

It is ironic being a people so politically educated, how our leaders never tire of repeating themselves, they hide information from us and do not allow us to analyze it and draw our own conclusions. Perhaps it is with a patronizing intent that we not lose time thinking, which is something they already do for us, and we can devote ourselves fully to our main and only task: to try to survive.

Fortunately, in the real world, despite prohibitions and restrictions, preventing access to information is practically impossible, since it is obtained from different sources.  The thing that offends is that though we are adults, they attempt to treat us like children, feeding us only ideological babyfood, let us reach higher!

Translated by Yoly from Oly