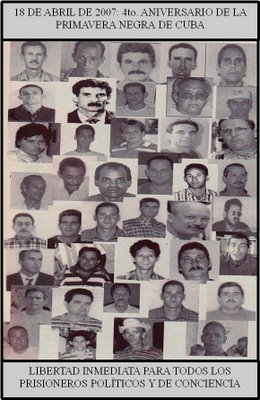 Between the 1st and 8th of April we Cubans marked the 8th anniversary of the “Black Spring”, this time with much more emphasis because the Cuban government seeks a justification for a new wave of sentences. The alarm went off with the 5 chapters of the documentary series “The Reasons of Cuba”, which was transmitted by Cuban TV throughout these past months.

There are some who think that it is very unlikely that the government will unleash another wave of repressive actions after it “freed” 115 political prisoners. In fact, many interpret such actions as being risky due to the international landscape. However, in the midst of insecurity and uncertainty it cannot be ruled out.

The law, their main weapon, is in full force with all its repressive power. The authorities do not need to turn to extrajudicial procedures. Judicial orders give them the freedom to act however they wish, and their legal norms are sufficiently wide enough to be interpreted and applied towards any case.

One does not need to search through history to find examples. Recently, the North-American, Alan Gross, was accused of committing crimes against territorial independence and integrity, just for introducing satellite connection systems into the country, and he was sentenced to 15 years in prison. Eight years ago, 57% of the group of the 75 Cuban dissidents were sentenced for the same crime the US subcontractor was accused of.

What’s certain is that the circumstances have changed, but so have the arguments. The security apparatus, in addition to vilifying the use of new information technologies, found a new battlefield on the internet — a confrontation point with the eternal enemy of the Cuban Revolution, and another generation of dissidents — the bloggers.

In 2003, the courts claimed that the dissidents were agents of North-American politics who simply sought to sanction Cuba in the Human Rights Commission or carrying out a “humanitarian intervention, which is nothing else than an armed invasion”, by a foreign power in national territory, as recently occurred in Libya.

“There is a form of cyberwar being waged against Cuba and other countries considered to be enemies of the United States. They are encouraging a blogosphere which, despite its claim of being ‘independent’, is totally subordinate to the interests of Washington DC”, asserted Granma, the official newspaper of the island’s Communist Party, in a special report which complimented “The Reasons of Cuba” TV series.

According to the official media, the “Cyberwar” is a “military conflict” related to the use of the internet. “Undoubtedly, the conservative Yankee wing has started to formulate new confrontation pretexts and scenes to slander the Cuban revolution and to start an eventual military aggression”, the newspaper reassured.

The qualifying of all sort of dissent as subversive and financed by the United States, along with the vilification of all communication equipment, creates the suspicion that the government may be preparing itself to carry out a new wave of aggression against the new sector of civil society which uses these means to voice their critical posture against the system.

Behind all of this: the trial of Gross and the reports contained in “The Reasons of Cuba”, along with the Cuban security apparatus, are going after their prey — the cyberdissidents. In their desperate attempt, they are turning to old tricks and strategies to justify not only their arbitrariness but also all that cannot be justified.