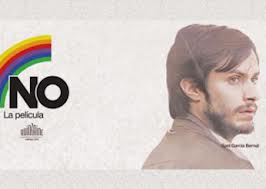 Two different audiovisual have made me reflect again on our country’s future. The first, a recent BBC report on North Korea. It is one thing to read about this dystopian society and another to view images whose referent is the Orwellian nightmare. Politics is complicated, but they can not be good. Knowing them to be friends of my government gives me a feeling similar to that produced in me by demonstrations of friendship with the Iranian government.

But to dispel that depressing vision, last night, in the Cinema of Our America, I saw “No,” the Chilean film about the referendum against Pinochet. The film left me feeling very positive that the opposition could act from joy, and so from that feeling can call people together.

Not to maintain the scheme that to dissent is dangerous, because people from instinct or fear shy away from dangerous situations, even when they can’t divine them, can’t divine the depletion of public confidence in the government.

From the confrontation and the pulse, the heroism is evident, but this in itself does not add up and often valuable and much-needed life. I’m thinking right now about the hunger strike of a large group of activists from UNPACU — the Patriotic Union of Cuba — which very few Cubans inside the island know about, but which is magnified in this rumor of repression to which they are subjected.

There are ideas that I share with you, readers, because you already know what the associations are. With all due respect for the pain of many families, the joy, that component of our character, should be a basic component in the mortar of our reinvention as citizens.