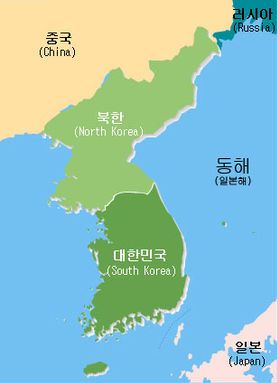 For some time North Korea seems to be “resetting its war of the ’big bark’” and increasing its verbal “shockwaves” and tensions in general. The discourse heats up the diplomatic tone and increases general tension. They assert that it is the opponents who are the provocateurs, because they are engaging in joint military exercises with the United States, but everything seems to indicate that the it is due to the hunger of its people, the inability of the government to solve that, and the reaffirmation of a dynastic president, who arrived at his post through blood ties and needs to morally consolidate his power before his army.

The Japanese military occupation ended in 1945, Korea was divided in two by the 38th parallel: the north, occupied by the then Union of Soviet Socialist Republics and the South by the United States Army. In 1950, Kim Il Sung’s grandfather, supported by China and Russia, invaded the south of the peninsula, which cost him the war with the United Nations. In 1953 he signed an armistice that ended the shooting war, but both countries are still officially at war, as they have not signed a peace treaty.

This is always the threat, but is more danger every time there is an undemocratic caudillo leading a country supported by opportunistic people who do not want anything to change to maintain their standing. They are the manufacturers of perks, the irresponsible dispatchers of misery, who see the specter of conflict everywhere to keep their interests intact.

Because of bad decisions in the People’s Democratic Republic of Korea — essentially dictatorships tend to emphasize “democratic” in the name of the country — the human species is approaching the precipice of war. We already faced this Cuba in 1962 and the earthquake caused serious geopolitical tensions worldwide. Today, with the possession of weapons of mass destruction by North Korea, the threat becomes a conclusive ultimatum.

The use of force is an animal instinct that human behavior assumes despite its complete lack of reasonableness. I hope that on this occasion, as on others, once again sanity and the spirit of survival will prevail, and that in the near future no country will again become victim of irresponsible leaders, who in order to “send messages” to their own subalterns, international allies and enemies, and to stay in power, threaten world peace.