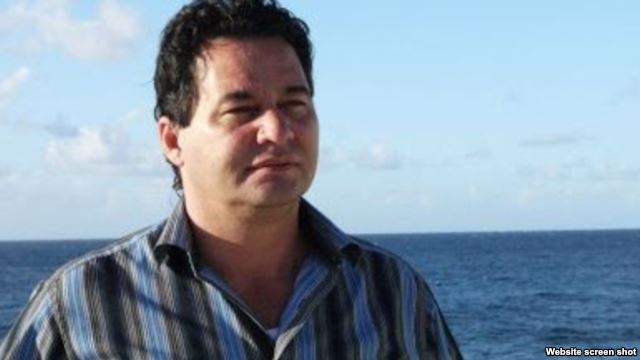 “He deserves it twice over, for suffering an unjust imprisonment for his gifts, as status as a narrator,” said the writer Jorge Olivera Castillo in celebration of the news that his colleague Angel Santiesteban-Prats received the Franz Kafka Novels From the Drawer International Prize, awarded to censored writers by the Czech Republic.

The Summer When God Was Sleeping, focused on Cuban rafters trying to escape the country, is the winning work and will be presented this Friday in Berlin at the Cervantes Institute in the German capital

At the event José Manuel Prieto, Jorge Luis Arzola and Amir Valle, Cuban writers in exile, will take part in a discussion moderated by the German editor Michi Strausfeld, where they will talk about issues of Freedom and Creation in Cuba.

The Franz Kafka Novels From the Drawer International Prize was first awarded in 2008 in the city of Prague to the writer Orlando Freire Cuban writer Santana for his novel The Blood of Freedom, and its name “Novels from the Drawer” is from the need to promote those authors that are censored by the authorities.

Olivera Castillo, former Cuban television editor and author of several books of short stories and poetry, was sentenced to 20 years in prison in the Black Spring of 2003, believes that Santiesteban’s award shows “his caliber as a writer.”

Santiesteban-Prats is serving five years in prison after a trial full of irregularities which has been denounced by his colleagues and several independent media within the island, as well as relevant international organizations.

His literary work won important awards from Cuban institutions such as the House of the Americas, the Prize of the Union of Writers and Artists of Cuba (UNEAC) and the “Alejo Carpentier” prize granted by the Cuban Book Institute of the Ministry of Culture, until he decided to publish his blog, The Children Nobody Wanted, openly critical of the situation in Cuba today.

“Previously he won the three main awards for stories, which is something unheard of, for someone who is barely 50 years old,” says Olivera who chairs the Cuba PEN Writers.

Other Cubans writers who have been awarded the Franz Kafka Novels From the Drawer International Prize are Orlando Luis Pardo Lazo, for the novel Boring Home; Frank Correa, with The Night is Long; Ernesto Santana, for The Carnival and the Dead; and Amel Hechavarría for Training Days.

The Czech library Forbidden Books Czech, dedicated to documenting the literature of the anti-communist Czechoslovak dissidence, and initially the Independent Libraries of Cuba (Founded by Ramon Colas and Berta Mexidor) are responsible for editing and promoting award-winning books inside and outside Cuba.