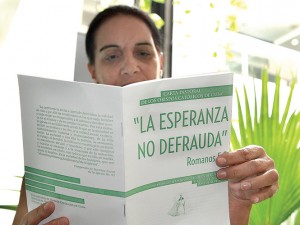 GUANTANAMO, Cuba, 14 October 2013, www.cubanet.org – The latest Pastoral Letter of the Catholic Bishops of Cuba, “Hope does not disappoint,” has been distributed to the faithful. Contrary to what happened twenty years ago, when the document “Love Hopes All things” was unveiled, so far this letter has led to no reaction from the government or the official press.

Several people attribute this to the fact that conditions have changed significantly. The new document is being made public at a time when relations between the hierarchy of the Catholic Church and the government are good, and when the  institution can serve the government as an intermediary in resolving conflicts. The truth is that, without flourishes, the bishops have prepared a thorough and accurate analysis of our reality.

For reasons of space, we could not attempt an examination of all aspects addressed in this new Pastoral Letter. Those interested would find it useful to read it in full. However, by way of advancement, I would refer you to several of its highlights.

For example, in the second section, entitled “The visits of the two Popes mark our history with signs of hope,” the bishops discussed the significance the visits to the Isle of Blessed John Paul II and Benedict XVI have had on the Catholic Church and the Cuban people. Meanwhile, in the third section, “The divine and human word of the Church encourages our hope,” it discusses the role of the Catholic Church in Cuba today.

In the fourth section, “The common destiny of material goods and freedom are a source of hope,” it states that among the different options for the common good, the Church chooses one that defends and promotes the responsible freedom of man. Also in this section it argues that human beings can not seek their own good while forgetting or neglecting or oppressing their brother. And that the structure and organization of societies and governments, both yesterday and today, can generate groups of power that do not always represent everyone and which are not interested in those who are outside their circle of belonging.

Literally, the bishops warn in the fourth section: “No one can claim freedom for themselves and deny it to others, or seek his own good and be indifferent to that of others. The freedom that God conceives for man is a freedom responsible for the lives and the destiny of those around us.”

The fifth section, “The changes encourage the hope of our people,” makes reference to the Pastoral Letter “Love Hopes for Everything,” and how some of its petitions have been met, but not others.

For its part, the eighth section, “The hopes of a better future also include a new political order,” is perhaps the most daring of the entire document. It says that Cuba is called on to be a pluralistic society, the sum of many realities, the nation of all Cubans, with their differences and aspiration, and there must be the right to diversity of the thinking, creativity, and the search for truth.

In the ninth section, “Dialogue among Cubans opens a path of hope,” the bishops insist that this is the only way to achieve and sustain the social transformations taking place in Cuba. While the tenth section, “Cuba in the concert of nations: reasons for hope,” mentions the changes in Latin America and in the world, and commits to the inclusion of Cuba in these contexts, but also reiterates the need to consider the relations of our country with the United States.

In the eleventh section, “The family and youth, hope of the Nation and the Church,” the bishops examine the matter deeply and honestly, based on the assertion that twenty years after the publication of “Love Hopes for Everything,” family life in Cuba is very poor, with severe consequences that affect the lives of individuals and society.

In sum, it is a document that not only responds adequately to the expectations created by the bishops of the Cuban Catholic Church, with their previous pastoral letter of 1993, it also traces the historical role that corresponds to this institution in the complex circumstances of the present and the near future.