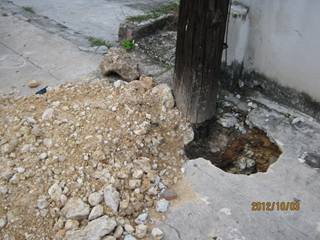 For several weeks now, The Electric Company has been replacing old wooden electricity poles, the majority of which date to the time of the Republic, and which have been in use for more than fifty years. Since they were not regularly replaced over the years, it is now being done on a massive scale, with the resulting inconveniences and impact on the population.

I don’t know how it is done elsewhere, but in Havana, specifically Nuevo Vedado, the method being employed leaves much to be desired. Days and sometimes weeks before, a hole is dug several centimeters around the pole, leaving it exposed next to the extracted earth. This poses a potential danger for passersby, especially at night, when street lighting is scarce. Also, during rainy days like these, the hole often fills with water and the extracted soil around it washes away, making the sidewalk, which generally has deteriorated due to lack of maintenance, unpassable.

To change a pole, a crew of four to six men take ten hours, from eight in the morning until six in the evening, a period of time in which the electricity is shut off in the affected area. If two to three brigades work in the area simultaneously, they can change two to three posts a day. This happens at least once a week. We therefore have a planned power outage of ten hours duration weekly. Due to the large number of poles to be replaced and the “high productivity,” the outages are guaranteed to go on for the rest of this year and even into into the next.

I am not opposed to the poles being replaced, although I would have preferred an underground system — one less susceptible to being battered by hurricanes — but we cannot “squeeze blood from a stone,” especially in moments of crisis. What bothers me is that, while each post is being replaced, only two men are really working. The rest are looking on, waiting their turns while sitting on the curb, accompanied by a bottle of rum. It is possible that this constitutes a new form of “socialist labor” in connection with “the updating” of “the model,” but by all lights it seems quite unproductive. This is not an anomaly. I have seen it on numerous occasions, which leads me to believe it is established practice.

In summary, the method used to replace electrical poles guarantees there will be outages, but without having to declare them as such by disguising them as “maintenance projects.” We enjoy other outages of the same duration, these disguised as “tree pruning projects.” Without a doubt the Electric Company deserves recognition for its originality in creating new forms of outages.