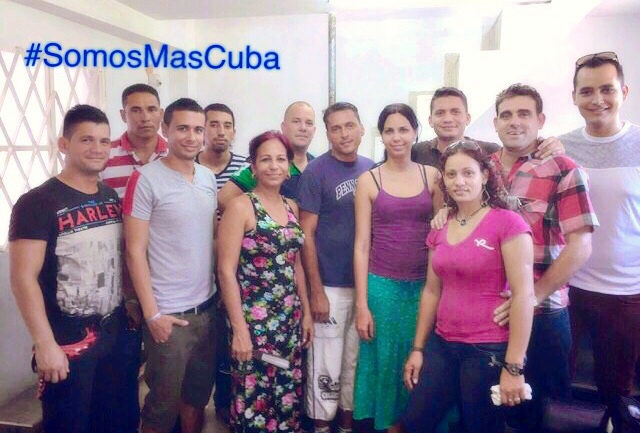 Somos+ Press, 11 August 2015 — The National Council of the Somos+ Movement met yesterday, attended by delegates from five provinces. The meeting lasted from 10:00 am to 5:00 pm, and ran smoothly. Issues vital for the movement were discussed, such as the consolidation of the national and territorial structure, communications, internet access, regulatory documents, management of membership, and internal democracy and transparency, among others.

“Overcoming” was the predominant theme in the discussions, as well as the need for all members to stay well informed. The representatives also received all the financial information of the organization and had access to the current status of the accounts .

Similarly, the importance of teamwork between members living within the country and those who reside abroad was analyzed. It was recognized that the work being done in a consolidated international platform provides the cover necessary for work in Cuba.

During the day the National Coordinator of the Movement was elected for this foundational stage. Manuel Diaz Mons will carry out this responsibility until the general elections, which will be held next year and will determine the entire leadership structure for a period of four years.

The council also supported the initiatives carried out in conjunction with various civil-society organizations for proposing new laws on elections and associations, and for constitutional changes. We are participating directly in these efforts.

The “overcoming” activity of the meeting was conducted by Doctor of Laws Wilfredo Vallín, who offered the participants an introductory lecture on rights of citizenship based on the law in effect in the country.

At the unanimous request of the council, Dr. Vallín, who chairs the Independent Law Association of Cuba, agreed to provide advice to our movement for presenting a registration application to the Registrar of Associations of the Republic of Cuba, a procedure that could take place this same.

The founder and president of Somos+, Eliecer Avila, thanked those present for their decision to commit to the future of Cuba and its people, from a position where seriousness, intelligence, perseverance, knowledge, and respect are the key pieces to achieving the success we hope for.