Cubanet, Miriam Celaya, Havana, 5 October 2015 — In recent days the official Cuban press published a report on the National Capitol building restoration work currently underway, in order to get it ready for the operation of the National Assembly at an unspecified future date.

Unfortunately, the report suffers from inaccuracies and from the typical flourishes of the Cuban school of journalism, which focuses more on the emotions of the author during his quick tour of the works and his personal adventure aboard a winch at over 262 feet above ground than on the truly interesting questions that might interest a fairly astute reader, for instance, the total cost of the work five years after the start of the project, which has already exceeded the length of time that it took to construct the iconic building, or the reasons that led to the decision to return this structure to its original function of hosting Parliament after its deliberate and systematic destruction and its Republican values by the willpower of Castro I.

Another interesting detail would be to find out whether the great 25 carat diamond will be returned to its original place at the feet of the Statue of the Republic, under the 301-foot high cupola, a spot marking Kilometer Zero of that other icon of Cuban civil engineering, the Central Highway. This point seems particularly allusive, since the referenced report includes that this building receives grade one protection, that is, that the building’s original configuration should be preserved and unaltered, including both structural and ornamental elements.

The Enigma of “Kilometer Zero”

Thus, in addition to the issue of the enormous cost of the magnificent building’s rehabilitation in the midst of a city whose housing stock is literally falling apart, the current restoration of the National Capitol places the enigma of its diamond back in the limelight, a topic deserving of its own separate chronicle.

The gem is surrounded by legend, and it is said to have belonged to a Russian czar, and to have arrived in Cuba in the hands of a Turkish jeweler who bought it in France. Prior to that, its origin is ambiguous and hazy. What we know for sure is that it was bought by the government of General Gerardo Machado y Morales (1925-1933) and destined to meet the young Republic’s excessive national vanity when it was planted in the main floor of the emblematic Capitol.

During the second presidency of Dr. Ramón Grau San Martín (1944-1948) it was rumored to have been stolen by an obscure police lieutenant or by a corrupt official. The mystery has never been cleared up completely, but the diamond was returned to the base of the Statue of the Republic, where it remained in view of visitors until 1973.

From that time, the fate of the controversial gem is a complete mystery, when without notice and under circumstances unknown to the public, the decision to replace it with a replica was made. Reportedly, the original was placed in the vault of the Cuban National Bank. There is no reliable testimony or evidence to corroborate the story, but popular speculation has it that the omnipotent dictator, former President Fidel Castro, assumed ownership of the gem. There are also those “in the know” who say that the precious stone was removed from the country years ago, under the auspices of the autocrat himself, but neither of these versions has been confirmed and those truly or supposedly involved have kept absolute silence on this matter. 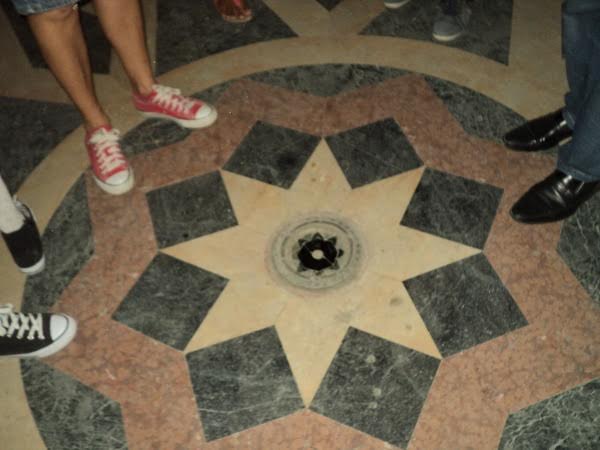 Over five decades ago, and in the name of a revolution with a short life but with devastating and prolonged effects, the Capitol building was seized by the Unmentionable. The chambers of Congress were disabled and the majestic building was delivered in the early 1960’s to the then newborn Cuban Academy of Sciences, an institution with congenital malformations, whose cost and name would far exceed its functions. This institution was responsible for methodically destroying most of the heritage furniture and other interior facilities of the property.

Over a period of several years, successive partitions were constructed inside the Capitol building which affected the walls and columns, while the interior gardens at the north and south wings and the light fixtures, plumbing, stained glass, mirrors, curtains, tapestries and frescoes decorating the interior suffered the ravages of the neglect and rapacity of the new occupants.

Meanwhile, basements often flooded and were not drained at appropriate intervals, so the resulting moisture affected hydraulic and electrical installations.

Under the arch of the staircase, the Tomb of the Unknown Mambí* and related statues were desecrated for decades, since this area was regularly used to load and unload “maintenance” service trucks, and eventually became a virtual automotive repair shop for the Academy.

The exterior Versailles-style original gardens were gradually transformed into makeshift sports areas where children and adolescents would skate and play soccer or baseball, to the consequent detriment of the gardens, while the constant plodding of pedestrians through them turned the once green lawns into dirt footpaths.

The outer corners at the foot of the Chambers had become literally impassable because they were saturated by the stench of those passersby who regularly used the area to relieve themselves, while the rear esplanade became places where senior groups would do their morning exercises, and the side ramps of the majestic stairs served as slides for all the surrounding neighborhoods’ kids to play on.

All the surrounding areas oozed with the filth and decay inherent in the system. It might be said the government’s intent was to subject, through humiliation, the stunning arrogance of this proud symbol of the Republic.

Towards the end of the 1980’s another one of the raves of Castro I — “the greatest” Library of Science and Technology in Latin America — played havoc with the rich collection of the Cuban Library of Congress, which miraculously had hitherto remained relatively intact and safe from voracious predation. Lots of valuable books, fruit of human knowledge and treasures of world culture ended up strewn and on piles on the floor of the Salón de los Pasos Perdidos (The Gallery of Lost Steps) at the mercy of the violence of some “scientists” turned-retailers, a fact that -of course- was not documented by the official press or by government institutions, but one that numerous eyewitnesses and I can attest to. Someday, this episode should be included among the losses caused to Cubans by so much official vandalism, and we should demand reparation.

The brand new library never reached the heights that The Amazing-in-Chief dreamed of, nor fulfilled the functions over which such mayhem took place. Thus, apathy and detriment continued to rule over the Capitol, turning it into a pitiable spectrum of what it was during the Republic. Interestingly, the product of what so many engineers, architects and artists created had been almost destroyed by the power of one man.

However, to everyone’s surprise, despite the economic crisis facing the country, and counter to the growing needs of the population, the largest restoration ever made to the Cuban National Capitol is currently being undertaken by the Office of the City’s Historian.

As usual, the authorities have not bothered to report the amounts and sources of funds that have been earmarked for construction. Transparency is not a quality that adorns autocracies, and the “reformist” spirit of the General-President is not enough, but it is assumed that the restoration of the rich stained glass windows, the bronzes, the marble, the tapestries, the sculptures, the frescoes, the furnishings and the precious woods, plus the carpentry to restore doors and windows to their original appearance, will reach a very large sum.

To date, they have already completed work on most of the north wing of the building and its gardens, now visible to the public. Project leaders want to tempt the public with a preview of its restored appearance.

Perhaps in a not too distant future, people in Havana traveling through the area will gaze at that colossal symbol of the city with renewed pride. By then, another phase may be over of the curious cycle of the return to symbols — and only symbols — of the Republican tradition orchestrated by Castro II. Perhaps many Cubans, with the patience worthy of better causes, will resign themselves to gaze over the beautiful gardens and the imposing Capitol glamour, to later return to their daily hopelessness and poverty. Or maybe they will decide to change their own reality, convinced that restoration of prosperity and democracy are not included in government projects.

*Rebels from the Cuban Wars of Independence from Spain