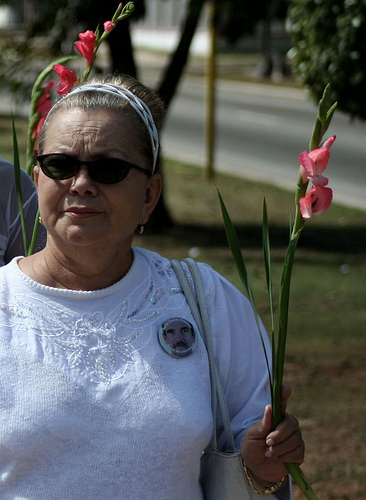 In a country where the politicians are puppets of a histrionic megalomaniac, their loyalty in the process of extinction, it was logical that politics would displace the empty womb of the neighborhood, its ovaries dying of boredom and horror, and that a Cuban woman in her kitchen cooking up Cuban food would take Cuban nylon bags to her Cuban husband, imprisoned perhaps for life in a Cuban jail.

In a country where the opposition and independent journalism are not only infiltrates, but function as a de facto most secretive branch of State Security, where the customary and counterrevolutionary anger is channeled and controlled, it was logical that the rebellious spirit would be reincarnated outside any dissidence and its digital string of complaints.

In a country where the last thing that happened in the streets, in January of 1959 (half a century or half a millennium ago, infra-national paleo-history) was the eternal treads of a tank crammed with the “bearded ones” with their charismatic weapons, it was logical that tomorrow’s illusions would announce themselves now on foot, without the cannon of the future nor complicit charges to kill the rascals (just a few with white shoes, almost barefoot, like in the worst patriotic poetry).

In a country which maintains behind closed doors a claustrophobic reserve against the word, with inertially headless ministers and headlessly inertial police, where suspicion is synonymous with survival and lying is the only remaining reason of the State, it was logical that the silence of gladioli held high would resonate, flaming and ephemeral swords, petals sold cheaply by the self-employed, decapitated flowers from Sunday to Sunday as a sacrifice of love (a sentiment so archaic).

In a country there the protagonist is punished (only the amorphous mass is legitimate), in a country sandwiched between a precarious present and the notion that only a fight to the death is fraternal, where exile is taken and treated like a disease (an ailment to which hypocrites and the non Hippocratic alike aspire), in a cult-of-personality country even after the cult of Maximum Personality (Alma Pater), in a country cauterized of civility and where evil is materialized with constitutional status, it is logical that the best souls die or they make them die (under the indolent magnifying glass of the mocking majority).

In Cuba whoever speaks aloud the temptation that in the end there is a promised land, must pay the unpronounceable price of not being able to live here. Cuba as a scaffold. Who risks themselves here assumes the truth of their biography, they will be digging their own gospel in peace. Cuba as a plot. The official reality is One, and the demagogue cannot allow himself the luxury of pluralizing his decrepit speech. Cuba as an immovable cosmos. Sad interminable tragedy.
In the debased throats of our compatriots, in the air stuffy like a dominating socialist spray in the face of idyll of the international left, in the ugly photos of the executioners on stage and in the anonymous assassins also as props in the play, in the secret solidarity and the timid sympathy, in the amateur marches (open like gaps in the totalitarian city crazed by a power as despotic as popular), in the forgetfulness of our intimate pettiness (on the island as in the diaspora), in the implausible shame of our descendants, here and there will remain an echo of the insults which gave them no tome to stone you.

Like a nation on the verge of disappearance, we must ask of you the impossibility of forgiveness in life. Cuba as a life sentence. We, the surviving dead.