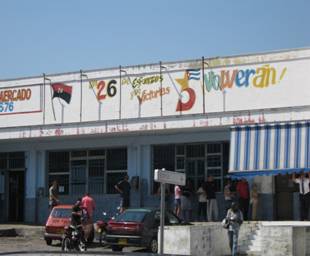 The supermarket at 26th and 41st, in Nuevo Vedado, years ago ceased to be super and even a market, becoming a deplorable place, where the few products are sold, assigned by the ration book, upon payment thereof, and they also sold some so-called “released” products — that is items no longer available through the ration book.

In its regression, it became a huge hot room with four islands (as they call the spaces, marked off by cardboard displays, where they sell products) and an unhygienic meat area, plus local administration, the store and the small area for dairy products at the back.

Completely enclosed with glass and bars, more to prevent the escape of the products, it protects itself from thieves, and is without air conditioning or vans and is even barely lit, a real sauna.It represents, in time, a kind of trade before the Spanish bodega or the Chinese warehouse, even without reaching the level of a country stand, in any modest suburb of the city. Its regression is complete, as far as trade is concerned and it is, without doubt, an original contribution to the Cuban model to the forms and methods of marketing, worthy of being studied, but not imitated.

As the market deteriorated so did its workers who, dressed in their own way (the long white coats disappeared ages ago), serve their users with some reluctance and sometimes even trying to short you a few ounces at the time of weighing. The grocers carry, from time to time, bags of rice, sugar and beans, on the creaking cart, that for years has cried out for a good oiling or replacement.

To the former warehouse it is better not to go (any anyway a sign prohibits it), given its state of disrepair. The original building, emasculated by a bakery and a CADECA (currency exchange) semi-detached, languishes, adorned with a little blush and old political slogans painted on its facade. The managers and employees also changed, but in every case for the bad, headed for the worse. The establishments of the of the model, like everything else, are a failure.