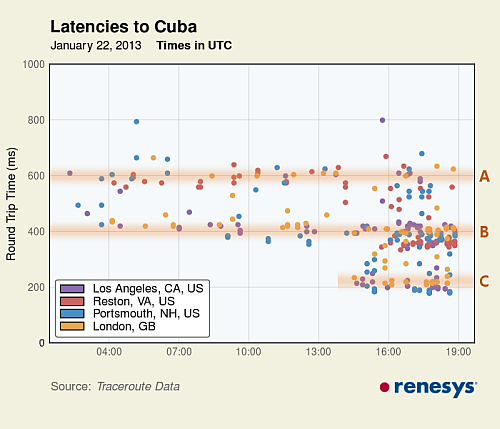 Our parliament met in December. A diverse conglomeration of ages, social backgrounds, races and genders… but with a single political affiliation. More than six hundred deputies who say they represent a nation, when in reality they only speak in the name of one ideology. The pantomime of plurality, with statistics designed to impress, given the number of women, youth, mixed-race or workers within it, but not with diversity of thought. A rainbow with seven bands of the same color. Or almost, because the palette contains only red and olive-green. But it is not precisely this tame group of individuals applauding in the Palace of Conventions that I want to write about today, but the fiber optic cable between Cuba and Venezuela.

When Maimir Mesa, Minister of Telecommunications and Information, issued a report to the National Assembly last month, not a single word was published about the Alba-1 cable. Since August 2012, the newspaper Granma said today, the submarine tendon was active for “voice traffic corresponding to international telephone service.” This means that when Mesa spoke before parliament, he already had information to give and preferred to withhold it, to hide it from us. Why? Perhaps out of fear that with that announcement he might stoke the excitement so many of us have to be connected to the Internet. Better to hide the details from us because he knows no information strategy other than secrecy. “The less they know the better,” seems to be the currency of our leaders.

But this world is a mere handkerchief, a baseball, a sour orange, and teensy. A few days ago the American firm Renesys announced (here and here) it had detected latency in the Alba-1 cable. First it was traffic in just one direction, which later balanced in the coming and going of kilobytes. The cable was alive, awake. Two years after arriving on Cuban soil, at a cost of $70 million and a thousand miles in length, the long fiberoptic serpent started to work. We had to learn, as so often happens, through the foreign media. Only when the news was already everywhere did the official press confirm it this morning in a brief note. A note that also warned that “the commissioning of the submarine cable will not automatically mean that the possibilities of access will multiply.”

The truth is, I no longer believe anything. Not the passive National Assembly, nor a minister who practices secrecy, nor the official journalists who were in that session of parliament and didn’t report on the absence of such an important topic, nor a newspaper that only publishes when its silences are uncovered. Much less do I believe in the character as true citizens of all those thousands of Cubans who have remained silent and have been satisfied with the least access to the Internet of any country in this hemisphere.