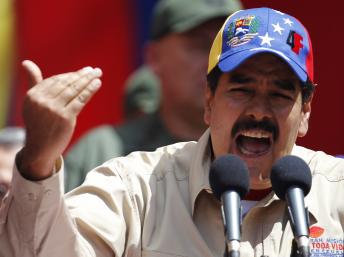 I already said in two tweets Sunday: “Even after death #Chavez won elections in #Venezuela. Maybe now, his imitator will let him rest in peace.” And I added the following: “The socialist bus driver takes the helm of #Venezuela. Let’s see how he drives from now on, Chavism without #Chavez.”

This April 14 the presidential elections in Venezuela ended with the hard-fought victory of Nicolas Maduro Moros. The leftist TC network Telesur — which we call TeleMaduro these days — constantly favored the incumbent candidate with extensive media coverage, so I could not confirm if the opponent Henrique Capriles followed the same pattern of behavior and showed himself as exalted and disrespectful as Maduro.

It’s true, I saw interviews throughout the campaign on that television network with followers of either presidential candidate: Maduro’s “Chavistas” knew and spoke highly of the candidate’s programs; Capriles’s supporters didn’t know a thing about his projects. It seemed that the respondents had been chosen and it was just like we were in Havana, in the presence of the usual discriminatory traps of the Cuban government.

It is no secret that Cuban authorities had bet on Maduro, no matter if the core of his campaign program was talk over and over again about Hugo Chavez, exploiting its undisputed leadership, charisma and image, giving with both hands — and even with his feet, like a magician king throwing a people’s money out the window of irresponsibility — the country’s resources just to get elected and stay in power. The obvious case is those eternal leaders of the Antillean archipelago who were forced to avoid jeopardizing the advantageous oil commitments made with Venezuela, and the security of continuity that they have provided for the last fourteen years.

On this side, the authorities did their part to give a boost to the driver’s* association. I’m referring to visible aid, as television programs reiterated over the last days devoted to Chavez and the so-called “Bolivarian revolution.”

In the past, in Venezuela, surely they also favored him with supporting the campaign openly on Telesur and with good advise to help the support his path to Miraflores. I imagine that knowing the results of the contested election, having received an alert about the odds advantage of the Socialist candidate, whom we don’t know if he’ll be capable of properly leading the destiny of this South American nation during his presidency.

I imagine that the Cuban leaders focus their gaze with more interest in the cardinal point to the north, focused on the survival of their own model of government, but while they are so intolerant and show no signs of real democratization and respect for diversity and political pluralism, they will not be taken seriously by any first world country.

Returning to Venezuela, I add that I don’t know if there be “Chavism without Chavez” or “immaturity” with “Mr. Mature” — i.e. Maduro –  what most concerns us and what we don’t have, is a financially independent Cuba. That, coupled with the destruction that “the most patriotic” have led the country in a general sense — well, if these are good …! — and the stubbornness of the U.S. government to refuse to normalize relations with Cuba, forced many Cubans to express their satisfaction with the electoral victory of the Chavista candidate. To want something different would have been a parody of the popular irony and ask for a rope for our suffering neck…