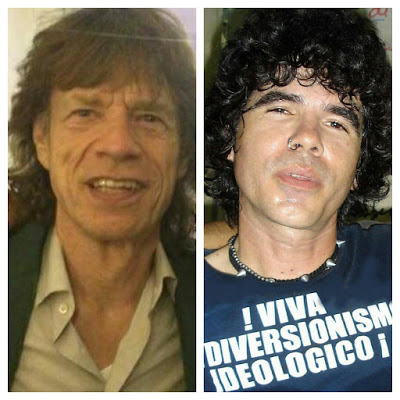 Arsenio Rodríguez Quintana, Barcelona — On Sunday, October 4, after visiting the Cuban Art Factory in Havana, the Rolling Stones singer was walking with the rocker and Cuban government critic Gorki Aguila Carrasco along 5th Avenue, where the Ladies in White meet every Sunday and march in support of human rights in Cuba. Cuban State Security blocks Gorki from going to meet them, but last Sunday, the day of Orula, an orisha venerated in Cuba, the miracle happened. Gorki was wearing an El Sexto T-shirt that interested Jagger, who asked about El Sexto’s state of health after his hunger strike, and offered to buy some of his artworks to support him.

They also spoke about the possibility of Gorki opening for the Rolling Stones should the conversations with the Ministry of Culture for the Stones to play in the Karl Marx Theater bear fruit.

Now that so many American rock, pop and jazz musicians are coming to Havana, it is worth remembering that this city where I was born had home grown impresarios (from 1910 to 1959) that brought the best American or European musicians of their times to Cuba: Enrico Caruso, Nat King Cole or Lola Flores, for example.

The person who cut this ebb and flow between Havana and the world was Fidel Castro. For more than 50 years – except in 1978, another USA-Cuba political rapprochement, and in 1999. The Castro regime not only censored jazz and rock so that it would not come into Cuba, but also censored and imprisoned those who played it.

Jagger, regrettably was in Havana but he didn’t meet with Gorki, the news is false, but my dear friends Ailer and Lia Villares will perhaps smile at my autumn dreams from Barcelona.