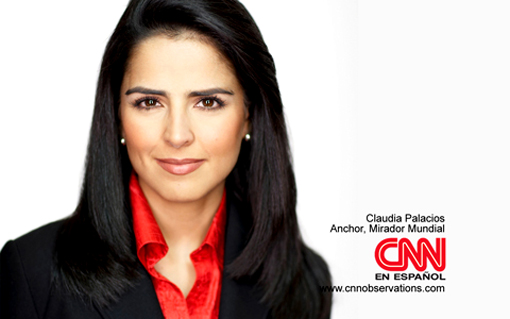 When the documentary was close to its end, I discovered an unbelievable sensation deep inside of me: the “destination” Claudia Palacios was proposing was absolutely unknown to me and made me feel the urge to visit it. CNN, through one of its reporters of spectacular beauty and proven professionalism, had just managed to make a Cuban who has only been out of his country for 6 months, hardly recognize Havana, and see himself tangled in a unrepresentative trap and the superficiality of the ample report to the point where he could accept the reality its author was proposing: yes, Havana is a place of enchantment in a paradise which had to be visited.

So different was the city that the ineffable journalist presented to me some days earlier, on the segment “Destinations CNN,” with a Havana I had visited dozens of times throughout my life, as a Cuban, and whose intricacies I knew like the palm of my hand.

The gray antecedent of this unfortunate material came from a Spanish television show. It was called “Spanish in the World”, and also filmed a sweetened, graceful, smiling Havana, which no doubt exists, but as an epidermal make-up which those inside know is empty and incomplete.

But the miscalculations of Claudia Palacios, the incisive interviewer of public figures, the journalist who knows her profession well enough to be able to assume that “speaking without knowing” is understandable in tourists interested in vacationing, not in communication professionals, seemed mildly scandalous to me.

Let’s say: to present Havana as a festive, tropical city, a city of clandestine cigars and people who serve you, is not exact. To only present Havana as a city of never-ending festivities, of happy and dancing Cubans, of mojitos and rental cars, without later delving into the refinements, inside the veins under the social skin, is a journalistic misfortune. And by this, I know I am not saying anything new to the talented reporter, which makes it worse.

Was it necessary or essential to present the most cruel Havana of all, of nocturnal thugs, the galloping corruption or the semi-juvenile prostitution? I wasn’t even asking for that, as a spectator of a coverage that evidently didn’t try for depth or questioning. I know the profiles and perspectives in which journalists sometimes focus our work.

But to affirm that behind the plans of “economic reactivation” undertaken by Raul Castro’s government, Havana had bloomed in a spectacular way, seems to me to be a conscious falsification of the truth, and that, in all its essence, is a crime of “lese journalism.”

Didn’t the smooth Claudia Palacios visit the barracks where hundreds of Habaneros or Orientales stack themselves, people who come from any part of Cuba or those born in the capital, without potable water, between cracked walls and grime stamped on the ceilings? Why was the reporter content with following the tour of La Habana Vieja (Old Havana) offered to her by a designated guide from Havana Tour, and not stepping out of the script of that tropical Virgil, not going down the pestilential streets that haven’t been repaired by the Historian’s Office, which are very close to those places she filmed? Perhaps the informed journalist is unaware of the usage of nations like Cuba, where those guides are faithful people chosen by and for the State Security, people who know precisely what they can and cannot show?

Perhaps Claudia Palacios didn’t see the private businesses with repeated products, fried flour patties, breads filled with spreads made from indecipherable ingredients, because of the lack of viable source materials that would allow them to grow as true business men? In that city she described as a Paradise made up of sea water and smiling people, didn’t she see the sweat running down the skin, the anguish of hunger, the buses crowded with irritable people, didn’t she see uncertainty, a little bit of indifference and a lot of hopelessness? Perhaps the beautiful Palacios doesn’t know that in that city whose growth in tourism she praised no end, attributing it among other reasons to the festive nature of Cubans, that a cohort of adolescents sell their bodies to repugnant tourists for barely a decent dinner or a letter of invitation to another country?

I find it impossible to grant credibility to the reporter of a leading world news chain, who doesn’t know that an immense percentage of Habaneros cannot visit those luxurious restaurants she showed in her documentary, and that for Habaneros and Cubans in general the fascinating Valle de Viñales remains of those places like Varadero, Cayo Coco, and the Hemingway Marina, that have been prohibited to Cubans due to the economic inaccessibility.

Evidently the objective of “Destinations: Havana” was simply marketing. It was to sell a destination, and nothing more. But I ask myself how far can journalistic ethics and decency permit, how far is it lawful to accept a manipulation of realities, showing only half the face of a city so complex as is Havana only because your work load is this and not that.

I ask myself: if all of a sudden the series “Destinations” thought it necessary to recommend Teheran, would Claudia Palacios step on Iranian soil concentrating only on showing the Tomb of Cyrus, the friezes of Persepolis Palace, or address with silk gloves the obedience of its feminine population, without delving into the whys, without diving under the surface, as her journalistic responsibility requires?

I think that aside from pink-skinned Europeans with desires to spend their savings well (I will always remember the words of an Italian in his sixties who said, in front of me, while he caressed the rear of a very young mulata accompanying him:”What would we be without Cuba!”). Aside from the brainless tourists from half the world, and aside from the representatives-implementers of a system like the one my native country suffers from today, nobody else could have enjoyed the “Destinations” filmed by Claudia Palacios.

Not even the people of the city where she took her images. Unfortunately those cannot give their opinion, because they live in one of the few countries where watching CNN is prohibited outside of some hotels, where cable TV doesn’t exist in each home, and so they will not be able to watch the fair mantle of the surreal circus attraction with which the journalist has shown them to the world.

Right this second I still ask myself if I ever truly got to know my Havana. I think that along with that Havana told by Dulce Maria Loynaz in her memoirs, along with the delinquent Havana of Pedro Juan Gutierrez, or the eternal nocturnal and sinful Havana of Cabrera Infante, we can now start to include the Havana of the beautiful Claudia Palacios. I wouldn’t know how to distinguish which of these belongs more to fiction.