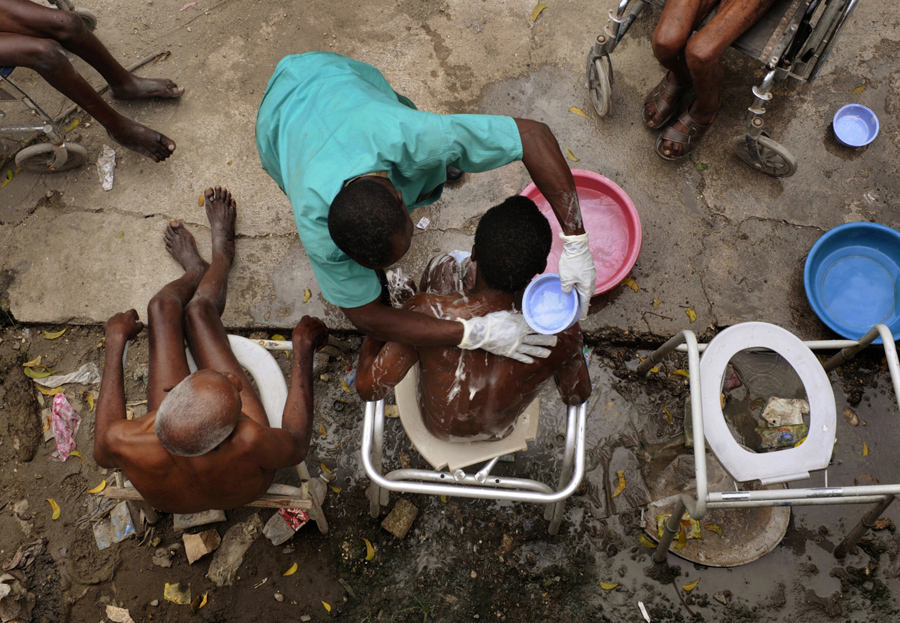 “Twenty dollars, Sir,” he answered me, in fractured English. A diaphanous but nervous smile softened his facial features. More than black his skin was almost purple, and he was of an indeterminate age: he could have been fifty, or all of a hundred.

I accepted his price, got in with him, and asked him to lower the windows. My incipient cold preferred the night air to the artificial. Not to mention that the night in Miami, starting from South Beach, hasn’t ceased to fascinate me with its feeling halfway between the cosmopolitan and nature.

He solicitously pleased his client, and again asked in his rustic English, “Is this OK, Sir?”

It didn’t sit right with me that a friendly taxi driver, who could be my grandfather, addressed me as if I were a “Sir” and he my possible servant.

He smiled again, and I would understand, in the fifteen minutes and travel and conversation, that it would be impossible for him to comply with my request. He could take me to the ends of the earth if I asked him to, he could lower all four windows of his car, but he could not stop calling me “Sir,” in the humblest of tones. A painfully obsequious tone.

“Where are you from?” In a multicultural city like Miami the possible answers were infinite.
“From Haiti, Sir,” he told me, without neglecting his driving.

“I like Cubans very much. Cubans saved a part of my family. Saved whom they could.”

And nothing was the same. Fleeting, intrepid, the images of death and horror appeared; I remembered Haiti crushed by natural fury, lacerated, eaten away under the rubble, infected with cholera: a pestilential and putrid Haiti. The hell where thousands of men, the poorest on the planet, had ended up crushed, or had died of dysentery, and where a small army of Cuban doctors had come on their protective mission.

In Miami there are too many Cubans, but the driver wasn’t referring to them. So, spurred on by this revelation, I asked another question,

“What did the Cubans do for your family?”

“They sewed up the head of my daughter,” he responded now with breathtaking speed; I had just touched a very sensitive nerve. “She lost an eye, and the blow kept her from speaking, but she would have bled to death if they hadn’t sewed her up, Sir. The wall of the school fell on her. The Cuban doctors also amputated my mother’s leg. She had the open wound for three days that, they told me later,” and he crossed himself while saying it, “began in the thigh and reached almost to the hip, and she had maggots, Sir, she had maggots. The Cuban doctors tried to save her, they cut off the leg. But my mother was half rotten, they told me.”

At this point I think my pulse stopped, I don’t remember if I wanted the miles to fly by, to get home, to protect me from that story; or if I deduced that in his convoluted language this Creole was sharing with me one of the most shocking confessions of my existence, and, therefore, I wanted time to freeze.

“Apart from your mother, did someone else die?” The words came out of me timidly now, came like a frightened apology.

“Except for my brother who works in Santo Domingo, and my daughter, my whole family died, Sir, what bad luck,” and here I looked at him and I understood, the smile on his face is a part of his profession, I understood that if he could maintain it while telling me that, it was part of his habitual spirit of servitude. Just that.

“But I like Cubans very much,” he repeated. “Friends told me that the Cuban doctors weren’t disgusted, and they bathed those sick with cholera, and put cloths on them to relieve the fever. And sometimes they shared the water given to them with the same patients.

But I knew I had to keep quiet. Why? Because my taxi driver wouldn’t understand a single word of it. And I know that I, in his place, would not understand either. Nor would it matter to me. I my conscience the idea of a handful of Cubans who saved my daughter would remain fixed. Period. And I was silent because deep down, underneath my consciousness, was the strongest remnant of all: for one second, for the split second in which I saw the limitless gratitude of that black and suffering taxi driver, I felt proud.

A battered pride, unhappy, torn between the good works and the crude manipulation. A sui generis pride, opposed to the idea that the doctors in my country are used like political chess pieces. But in essence, it was a pride that could not, did not want to, hide the reality: If dozens of Cubans born in the same land as I helped to save precious lives, whether from dirty politics or from a real vocation, whatever the motive might be, this man telling me now that we have arrived at my destination should feel wonderfully indebted to them, and I must thank them in silence, as well.

After getting out of the “Yellow Cab” I put my hand back pocket and pulled out my wallet. The driver, still with his smile — that in this second seemed different to me, seemed honest — said to me,

“Have a good evening, Sir.”

And stepped lightly on the throttle before I could extend the twenty dollars he had earned for his service.