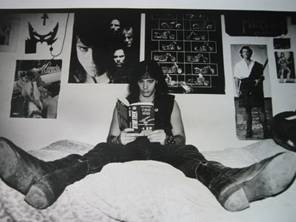 Those were the difficult eighties, and the stillness of the Plaza neighborhood’s House of Community Culture cracked under the onslaught of officialdom trying trying to abort a lovely project that, against all odds, Mireye Felipe and Maria Gatorna, Director and Deputy Director respectively of that institution, tried mightily to advance: a space for rock concerts.

It was a fact that this cultural event, despite the isolation and harsh prohibitions, managed to cross the impenetrable wall imposed by the senior representatives of culture in our country.

Rock, no way, it’s outrageous, and much less heavy metal! Those were the pro-government voices they had to listen to and which these two courageous women had to confront, seeking a place for the young lovers of this cultural event, where rock music could be played.

Mireya was soon transferred to another institution and Maria was left alone, boldly facing up against the old concepts and ingenuousness, with her soft, modulated voice, more suited to a faithful representative of classical music than rock, to make the Nomenklatura of the official Culture understand the benefits of these restless youth, and to create for them, there in the Communal patio, a space for them. 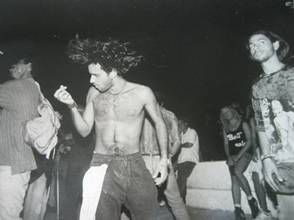 Bit by bit she pierced the wall of intolerance, and Maria intelligently took advantage of every little crevice, as step by step she gained ground. Thus, with courage, effort and unflagging devotion, that space became what everyone knew as Maria’s Patio. She was undoubtedly the Alma Mater who sheltered in her arms all those boys marked and rejected, by fear and official intolerance.

Today, many years later, when the courtyard disappeared as such and Maria is no longer there, a then young-rookie-of-lens-and-shutter, breaking into the world of freaks, rockers and the police became, in fact, an eyewitness. Thus, Alfredo was filling drawers and drawers with rolls and contact sheets, which distilled the faces and moments already historic. No one ever wanted to commit to publish these photographs here. Now, from France, which he has called home for some years, with his wife and daughters, Alfredo is working on a book project that will soon come to light, thus paying a tribute to Maria, the Patio and all those young people scattered around the world today , which form an important part of the Cuban cultural diaspora.