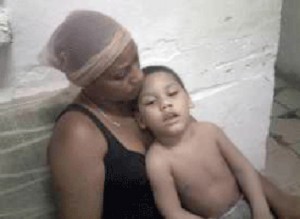 Yadima Évora Casales is a 25-year-old Cuban mother from Vista Hermosa in San Miguel del Padron, Havana. She believes she is a victim of deceit and manipulation at the hands of officials from the institutions that “respond” to the interest of the country’s citizens.

Her tragedy began five years ago when she became pregnant. Since she was healthy no one worried about difficulties in labor. The doctors who examined her did not realize that her uterus–high, narrow and backward–would prevent a natural birth and necessitate a Cesarean.

Since no Cesarean was prescribed consequences were awful for herself and the baby, who suffers from severe hypoxic ischemic encephalopathy which causes spastic quadriplegia (a form of cerebral palsy), according to documents given to Joel L. Carbonell Guilar, leader of the Organization of Human Rights of Free Cubans who recently reported the case to international organizations in the face of the apathy of officials from the Clinic of San Miguel de Padron.

In December 2006, Yadima went to the Hijas de Galicia Hospital with contractions, however, since her due date was January 19th the gynecologists sent her home. She went back on January 23rd with new contractions, she was again sent home because of a lack of beds. Upon leaving the hospital, a family friend who is also a doctor recommended that she return on the 26th, he would attend her during his shift. She returned that day to the maternity ward; five days later she was recognized and monitored by doctors but none of them realized she was past her due date. On the 30th her water broke in front of the attending doctor who recommended she sleep because she was not dilated.

Yadima did not dilate. She cried and the baby struggled to be born. The next morning another gynecologist put her on the monitor and the machines began to make noise. The baby’s heart was failing. The doctors decided to perform an emergency Cesarean. Her baby was alive and cyanotic (his skin was blue due to lack of oxygen). Three weeks later they returned home where Yadima discovered that the child could not hold up his head. “He’ll do it later” the specialists told her at her first appointment.

Four years later her baby requires special care to hold up his head, he does not walk, does not chew or have control of his sphincter and suffers from spasms in his hands and feet. He requires physical therapy and medications that are not accessible to Yadima and her family. Solutions are not available at the local clinics or the Julito Dias and Pedro Borras because the specialists and technicians are being sent on medical missions to other countries.

The tragedy of Yadima and her child, Ernesto Arias Evora, is worse because of their living conditions. They live with 11 family members in a small run down house with dirt floors and cement roof. She requested aid from government organizations such as the Administrative Council and the Housing and Health Directorate. After interviews and visits from officials and social workers who “elevated the case”, she wrote the State Council.

Yadima Evora Casales cannot work and waits for aide. She and her child were victims of medical negligence and are being bounced around by officials that have led her to believe they have solved her problem with a check for 158 pesos a month–the equivalent of 6 cuc, not enough for food and medicine.

This mother asks the government agencies for a wheelchair with head support, a blender to make meals for the child, diapers, a bed and medicine. She dreams of a room with ventilation, a bathroom and a kitchen to ease the plight of her child. She is still waiting.

She was told by Joel L. Carbonell that she must combine her plea with the demand, since article 26 of the Cuban Constitution allows for “reparation and compensation” for damages caused by State agents and officials. She also learned about the rules for the protection of children and youth and the obligations assumed by the island’s government when they agreed to the terms of the Instruments for Human Rights and the Conventions of Children’s’ rights.