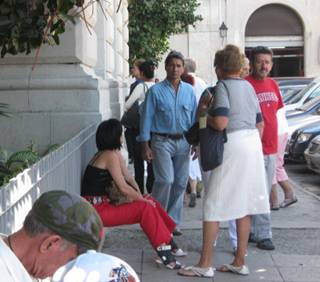 Lately I have been making travel arrangements, representing the son of a friend who lives abroad, for whom she’s given me legal power of attorney because he is still a minor of 17, though he has been serving his military service since he was 16. Doing this, I’ve been able to learn two very important things which are not general knowledge, and so perhaps it is my duty to divulge them:

While standing in line for the paperwork and inquiries with the relevant authorities, I’ve realized that men of military age don’t need to finish their service to be able to travel to the United States, due to the existence of an immigration agreement in which that country awards 20,000 visas a year to Cuba and Cuba, in reciprocity, exempts from military service those young people who want to travel to that country. This is not relevant to the case I’m working on, as it involves a question of traveling to Europe for family reunification.

I’ve also been able to learn from several people involved, that it’s not necessary to get international law firms to attest to degrees or certificates of study to present them in the U.S. Getting this paperwork, when you can even do it, is very expensive and must be paid for in hard currency. In this case you don’t have to do it because the agreement exists and the United States accepts the stamps and signatures from the universities and study centers that issued them.

As this information could be of great interest to many people, I’ve decided to publish it on my blog. However, it’s a good idea for everyone in the process of traveling to the United States to confirm it by directly asking the appropriate authorities. To my knowledge, this hasn’t been adequately disclosed and there are many people who, as well as sweating under the extreme heat, and standing for long hours in the lines, have left in tears, faced with the frustration and loss of time, for not having clarified these issues. I hope this information will be helpful to some people and they can avoid unnecessarily wasting their time and wearing themselves out.