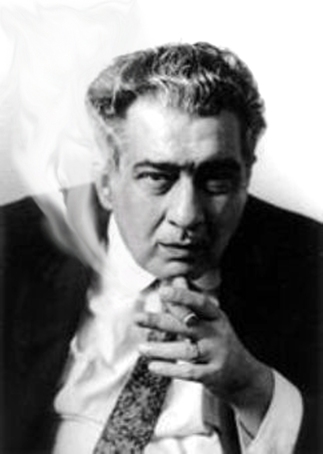 I still remember my first encounter with Lezama. In 1973, a bookshelf in my first office called my attention (another bookshelf, not one I already I mentioned) packed with a single book. The same book from the collection Cuban Letters filled three shelves. In the time I worked there, no one took a single one of those books, not even me, who knew nothing of Lezama beyond the fact that he was a writer who “wasn’t clear,” along with Virgilio Piñera, what remained of Origins, and others, almost all, today, glories of official culture. Lezama died surrounded by silence and only three or four of those who knew dared to go to his funeral. Most learned of his death the day after his burial from the little note appeared on an inside page of the newspaper.

Today a CSI team with Grissom at the head of it, just landed in Havana to follow the Master’s prints, discovered on a glass display case in Manzana de Gómez. These are prints of the ring, middle and index fingers of the right hand. Presumably these prints will be sold for a high bid in some curiosities auction, or even an art auction, considering they belong to the immortal hand that wrote Paradise. But that’s not all.

The National Jubilee which ends today includes the reopening of the restored house-museum, the publication of his Complete Works, a photo exhibition of his portraits, with associated honors for the photographer, Chinolope; the issuing of a commemorative coin and a postage stamp, and even the recreation of the the Death of Narcissus in a ballet.

One can only imagine that in his afterlife, Lezama is laughing enigmatically, enveloped in a cloud of smoke.