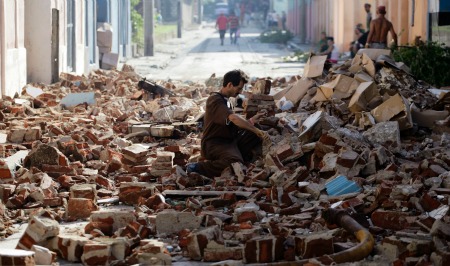 I am writing to you in your capacity as the highest political authority in our province of Santiago de Cuba. I am aware that, given the hierarchical structure of the Church, by rights it is not for me to undertake this effort, but rather for my Archbishop, Mons. Dionisio García, and I have repeatedly suggested that he do so. But following the dictates of my conscience, and from a basic sense of personal responsibility toward our people, on the eve of my perhaps definitive separation from the people of Santiago de Cuba whom I love so much, I am addressing this letter to you.

In recent months we have experienced the tragedy of a people who have lost everything or almost everything they had to survive: as you know more than a hundred thousand Santiago de Cuba families have been affected by Hurricane Sandy. We have watched with amazement the delivery of aid for our people from so many countries.

And with amazement we watched how this aid was sold for hard currency, or at inflated prices, in flagrant violation of the the intent of the donors who gave it freely. We have received information from reliable people who have followed the trail of the transports and have seen how this aid, above all the roofs, were stored in State or military warehouses, while the population was informed that these materials had already been exhausted.

With amazement we have seen government or military installations repaired in record time, while the people continue without roofs over their heads, with their houses uncovered.

We are witnesses to the frustrations of the people, to their desperation and helplessness, to a voiceless and threatening silence that makes us think that at any moment they could explode with an uncontrollable and justified rage, which could have dire consequences for the coexistence of our citizens.

Many times, on going to offer them our humble aid, almost all of it sent by other Cubans on the rest of the island, poor as the victims themselves, we have heard, “You are the only ones who remember us, the only ones who have assisted us”!

Mr. Secretary, the people perceive you to be an honest man, who works hard to fulfill his obligations and who cares about the people. We have also heard that corruption and incompetence surround you on all sides and, much to your dismay, hinder your work. All of this saddens and worries us.

As a priest, I have renounced having my own family. Along with some of my colleagues, when our families, parents and siblings decided to abandon our country, we decided to stay to serve our people in their misfortune. These people are our family: our parents, our children, our brothers and sisters. We live for them and we are willing to die for them. If today we raise our voices, at whatever risk it might entail, including being misunderstood, it is to seek a solution to so much misery and pain, and because we are not inclined to stare at the bulls from the other side of the fence, but to commit ourselves and to help with all our strength.

I ask in the name of God, in the name of truth and justice, and calling on your true patriotism which I do not doubt, that you seriously investigate what has happened and quickly remedy it.

I also ask that you yourself communicate with the president of our country, General Raúl Castro Ruz, so that, with the full weight of the State, repairs can be undertaken on so many totally and partially destroyed homes, something so important for these families affected by Hurricane Sandy. The call to the solidarity of our people you have already demonstrated in your generosity and ability during the hurricane and in the face of its devastating destruction. Thus, we make possible the Nation José Martí dreamed of, “with all and for the good of all.”